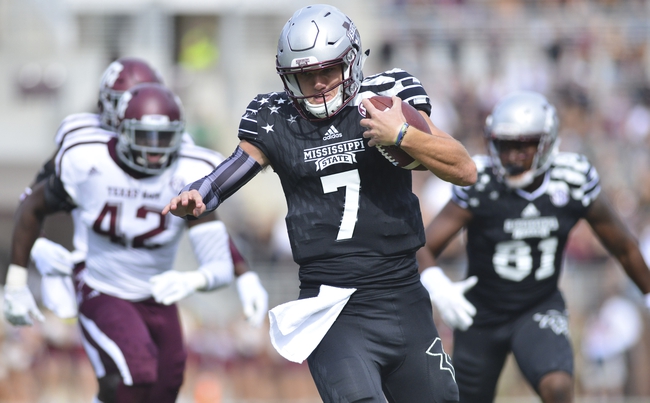 The Mississippi State Bulldogs and the Arkansas Razorbacks face off on Saturday in week 12 SEC college football action.

The Mississippi State Bulldogs are 4-6 this season and they need to win out if they hope to be bowl eligible. The MSU Offense is averaging 28.1 points and 428.9 yards per game while turning the ball over 15 times. Bulldogs QB Nick Fitzgerald has completed 53.3 percent of his passes with 16 touchdowns and 10 interceptions and he has rushed for 854 yards and 8 touchdowns. Aeris Williams is Mississippi State’s top running back with 402 yards and 2 touchdowns and Fred Ross is the top receiver with 57 catches and 9 touchdowns. The MSU defense is allowing 31.9 points and 434.6 yards per game with 11 interceptions, 8 fumble recoveries, and 21 sacks. Rickie Brown leads the Bulldogs with 82 tackles, Leo Lewis has 64 tackles, and Johnathan Calvin has 5 sacks. Mississippi State Head Coach Dan Mullen is always highly regarded but he rarely delivers much more than mediocrity and this season he hasn’t even delivered that.

The Arkansas Razorbacks ae 6-4 this season with all of their losses coming to ranked teams. The Arkansas offense is averaging 28.8 points and 409.1 yards per game and they have turned the ball over 19 times. Razorbacks QB Austin Allen has completed 60.5 percent of his passes with 20 touchdowns and 10 interceptions. Rawleigh Williams is Arkansas’ leading rusher with 1004 yards and 7 touchdowns and Drew Morgan is the top receiver with 49 catches and 3 touchdowns and Keon Hatcher has 31 catches and 5 touchdowns. The Razorbacks defense is allowing 29.9 points and 421 .2 yards per game with 9 interceptions, 9 fumble recoveries, and 19 sacks. Brooks Ellis leads the Hogs defense with 69 tackles, Josh Liddell has 51 tackles, and Jeremiah Ledbetter has 40 tackles including 4 sacks. Arkansas is coming off of a tough loss and they have been alternating wins and losses over their last 8 games.

While we have seen glimpses of success by Mississippi State this season overall it has been a train wreck of a season and it gets worse for them here as Arkansas runs over the Bulldogs like a runaway train.