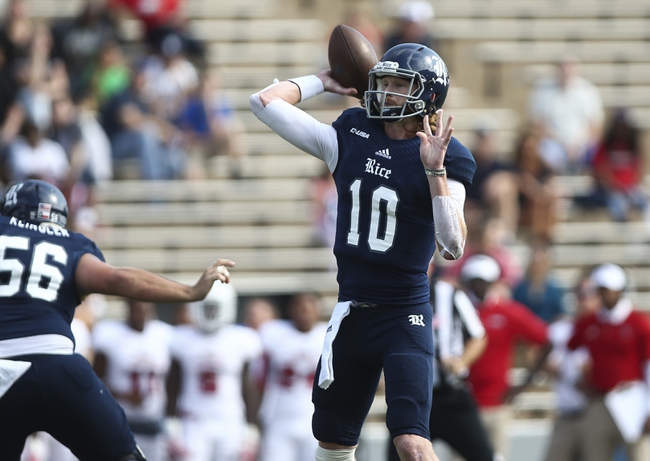 The UTEP Miners and Rice Owls square off Saturday in a C-USA college football game at Rice Stadium on ESPN3.

The UTEP Miners look for their second road win of the season to climb out of a 3-7 hole. The UTEP Miners have lost six of their last eight road games. Ryan Metz is completing 66 percent of his passes for 1,035 yards, 10 touchdowns and three interceptions. Metz and Zack Greenlee have combined for 15 touchdown passes this season. Cole Freytag and Hayden Plinke have combined for 789 receiving yards and 11 touchdowns while Eddie Sinegal has 24 receptions. The UTEP Miners ground game is averaging 177.9 yards per contest, and Aaron Jones leads the way with 1,397 yards and 13 touchdowns. Defensively, UTEP is allowing 35.1 points and 424.6 yards per game. Dante Lovilette leads the UTEP Miners with 73 tackles, Nick Usher has 5.5 sacks and Dashone Smith has two interceptions.

The Rice Owls look for back-to-back victories for the first time this season to bounce back from a 2-8 season. The Rice Owls has four home victories since the start of last season. Tyler Stehling is completing 61.1 percent of his passes for 2,023 yards, 12 touchdowns and seven interceptions. Stehling has one or less touchdown pass in four of his last five games. Temi Alaka and Kylen Granson have combined for 744 receiving yards and four touchdowns while Zach Wright has 34 receptions. The Rice Owls ground game is averaging 163.3 yards per contest, and Darik Dillard leads the way with 380 yards and three touchdowns. Defensively, Rice is allowing 38.3 points and 528.8 yards per game. Emmanuel Ellerbee leads the Rice Owls with 94 tackles, Preston Gordon has 2.5 sacks and J.T. Blasingame has one interception.

Neither ne of these clubs plays a lick of defense and neither has a bunch to play for with their seasons being lousy. However, Rice is at home and the home team has won six of the last seven games between the Owls and UTEP. This is also senior day for the Rice Owls, so you can expect a little extra motivation being on the side of the home team. It won't be easy and the team with the ball last will probably win, but I give Rice the slight edge.

The pick in this article is the opinion of the writer, not a Sports Chat Place site consensus.
Previous Pick
Free College Football Picks, Odds, Schedule, and TV Info For All Week 12 2016 Games
Next Pick
Georgia Tech Yellow Jackets vs. Virginia Cavaliers - 11/19/16 College Football Pick, Odds, and Prediction