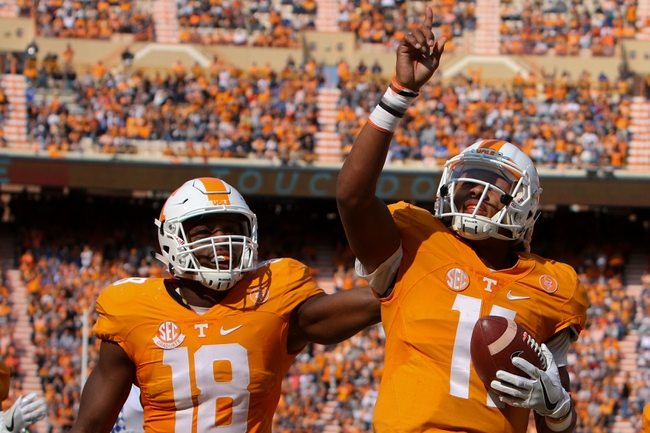 The Tennessee Volunteers and the Missouri Tigers face off on Saturday in Knoxville in week 12 SEC college football action.

The Tennessee Volunteers are 7-3 this season and they have won their last 2 gams. The Tennessee offense is averaging 33.8 points and 412.2 yards per game and they have turned the ball over 23 times. Vols QB Joshua Dobbs has completed 59.3 percent of his passes with 21 touchdowns and 12 interceptions and he has rushed for 470 yards and 7 touchdowns. Alvin Kamara is the top option in the Tennessee backfield with 441 yards and 5 touchdowns and he has caught 22 passes with 3 touchdowns while Josh Malone has 35 catches and 8 touchdowns and Jauan Jennings has 26 catches and 5 touchdowns. The Volunteers defense is allowing 26.9 points and 417.4 yards per game with 8 interceptions, 10 fumble recoveries, and 24 sacks. Todd Kelly Jr. leads the Tennessee defense with 67 tackles and 2 interceptions, Colton Jumper and Emmanuel Moseley each have 51 tackles, and Derek Barnett has 10 sacks. Tennessee has had a nice year but they have fallen short of their expectations as a spot in the college football playoff likely isn’t going to happen.

The Missouri Tigers are 3-7 this season and they are coming off of a win after beating Vandy at home last week. The Missouri offense is averaging 31.2 points and 486.7 yards per game and they have turned the ball over 18 times. Tigers QB Drew Lock has completed 54.8 percent of his passes with 21 touchdowns and 8 interceptions. Damarea Crockett leads Missouri in rushing with 837 yards and 9 touchdowns and J’Mon Moore has 47 receptions and 8 touchdowns. The Missouri defense is allowing 29.1 points and 464.4 yards per game with 13 interceptions, 5 fumble recoveries, and 21 sacks. Donavin Newsom has 66 tackles to lead Mizzou, Charles Harris has 8 sacks, and Aarion Penton has 4 interceptions. Missouri’s win ended a five-game losing streak and it was their first win in the SEC this season.

Generally Tennessee sleep walks through the first 3 quarters of the game but even so I see them demolishing Missouri here.