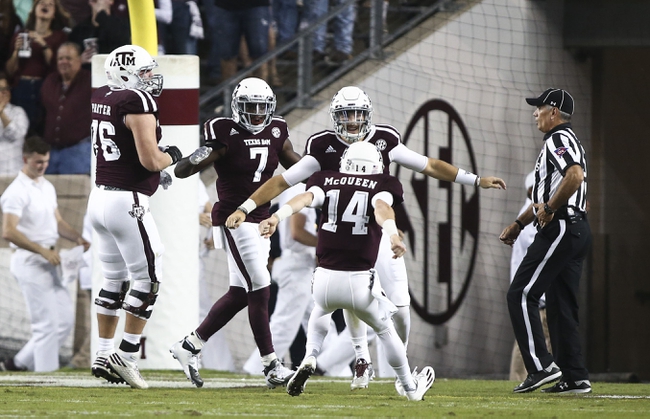 The Texas A&M Aggies and the Texas-San Antonio Roadrunners face off on Saturday in week 12 college football action.

The Texas A&M Aggies are 7-3 this season but they have lost 3 of their last 4 games. The Texas A&M offense is averaging 36.3 points and 471.4 yards per game and they have turned the ball over 17 times. With Trevor Knight out for the season Jake Hubenak takes over as the Aggies QB and he has completed 60 percent of his passes with 5 touchdowns and 2 interceptions. Trayveon Williams leads the Texas A&M rushing attack with 876 yards and 6 touchdowns and Keith Ford has 412 yards and 5 touchdowns while Christian Kirk has 64 catches and 7 touchdowns and Josh Reynolds has 39 catches and 8 touchdowns. The Aggies defense is allowing 22.2 points and 445.6 yards per game with 12 interceptions, 11 fumble recoveries, and 29 sacks. Justin Evans leads Texas A&M in tackles with 78, Shaan Washington has 72 tackles, and Nick Harvey has 62 tackles. Falling apart in the second half of the season is becoming a common occurrence for Texas A&M and they can only hope to stop the bleeding with a win here.

The Texas-San Antonio Roadrunners are 5-5 this season and are just a win away from becoming bowl eligible. The UTSA offense is averaging 31.6 points and 364.5 yards per game and they have turned the ball over 12 times.  Roadrunners QB Dalton Sturm has completed 59.2 percent of his passes with 16 touchdowns and 5 interceptions and he has rushed for 253 yards and 4 touchdowns. Jalen Rhodes leads UTSA in rushing with 709 yards and 8 touchdowns and Jarveon Williams has rushed for 675 yards and 8 touchdowns while Josh Stewart has 29 catches and 4 touchdowns and Kerry Thomas Jr. has 22 catches and 7 touchdowns. Defensively Texas-San Antonio is allowing 30.3 points and 413.2 yards per game with 7 interceptions, 10 fumble recoveries, and 22 sacks. Josiah Tauaefa leads UTSA with 94 tackles including 4 sacks, La’Kel Bass has 69 tackles and 5 sacks, and Marcus Davenport has 5.5 sacks. UTSA has been consistently inconsistent rising up some weeks and losing games that look winnable in others.

This is a lot fo points the way the Aggies are playing and the play here is to take the points with a scrappy UTSA team who can get after the passer.

The pick in this article is the opinion of the writer, not a Sports Chat Place site consensus.
Previous Pick
Free College Football Picks, Odds, Schedule, and TV Info For All Week 12 2016 Games
Next Pick
Georgia Tech Yellow Jackets vs. Virginia Cavaliers - 11/19/16 College Football Pick, Odds, and Prediction