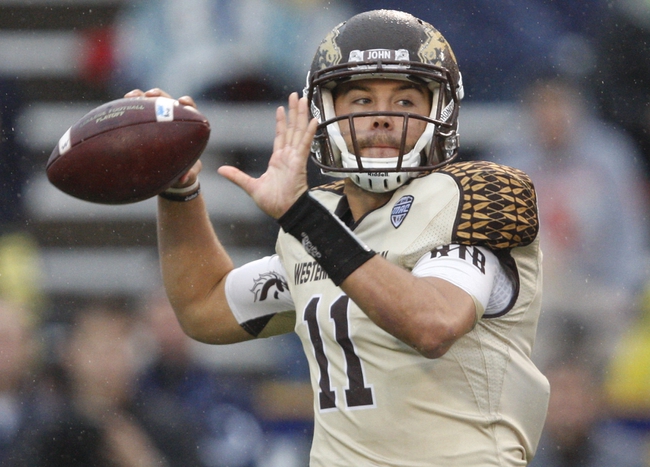 The Western Michigan Broncos and the Buffalo Bulls face off on Saturday in Week 12 MAC college football action.

The Western Michigan Broncos are 10-0 this season and ranked 14th in the country and are competing for a spot in the Cotton Bowl if they can win out. The WMU offense is averaging 44 points and 498.2 yards per game and they have turned the ball over just 4 times all season. Western Michigan QB Zach Terrell has completed 70.3 percent of his passes with 23 touchdowns and 1 interception and he has rushed for 6 touchdowns.  Jarvion Franklin leads the Broncos in rushing with 1152 yards and 10 touchdowns and Jamauri Bogan has 589 yards rushing and 7 touchdowns while Corey Davis leads the team in receiving with 62 catches and 14 touchdowns and Michael Henry has 51 catches and 3 touchdowns. The Western Michigan defense is allowing 19.5 points and 361.4 yards allowed per game with 12 interceptions, 7 fumble recoveries, and 21 sacks. Robert Spillane is WMU’s top tackler with 85 and Justin Tranquill and Asantay Brown each have 70 tackles. Western Michigan has been a force all season and they don’t seem to be losing momentum as the season nears an end.

The Buffalo Bulls are 2-8 this season and they have lost 6 of their last 7 games. The Buffalo offense is averaging 17.9 points and 357.6 yards per game and they have turned the ball over 16 times. Bulls QB Tyree Jackson has completed 53.1 percent of his passes with 9 touchdowns and 9 interceptions and he has rushed for 399 yards and 5 touchdowns. Jordan Johnson is Buffalo’s top rusher with 884 yards and 5 touchdowns and Mason Schreck is the top receiver with 50 catches and 4 touchdowns and Marcus McGill has 30 receptions. Defensively UB has allowed 32.3 points and 411.9 yards per game with 5 interceptions, 5 fumble recoveries, 15 sacks. Khalil Hodge leads the Buffalo defense with 103 tackles, Ishamel Hargrove has 74 tackles, and Ryan Williamson has 61 tackles. It has been a season to forget for Buffalo and they are up against it here.

This is a bundle of points but this game is about as one sided as it gets and I look for Western Michigan to run Buffalo out of the stadium and win by enough to cover the spread.