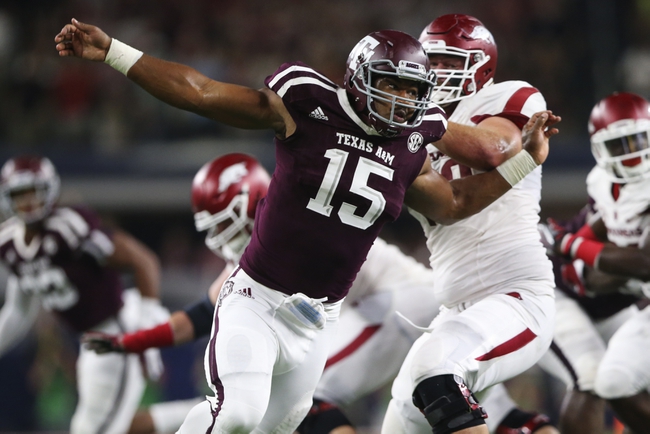 The Texas A&M Aggies and the LSU Tigers face off on Thanksgiving Night in a Thursday SEC college football battle.

The Texas A&M Aggies are 8-3 this season as they play their final regular season game of the year. The Texas A&M offense is averaging 35.1 points and 467.7 yards per game and they have turned the ball over 18 times. Jake Hubenak has taken over as the Aggies QB and he has completed 59.8 percent of his passes with 6 touchdowns and 2 interceptions. Trayveon Williams has been Texas A&M’s top rusher with 956 yards and 7 touchdowns and Christian Kirk is the leading receiver with 69 catches and 7 touchdowns and Josh Reynolds has 46 catches and 9 touchdowns. Defensively Texas A&M is allowing 21.1 points and 428 yards per game with 12 interceptions, 12 fumble recoveries, and 36 sacks. Shaan Washington is the Aggies leading tackler with 82, Justin Evans has 80 tackles, and Myles Garrett has 8.5 sacks despite missing significant time with injuries. Texas A&M is loaded with talent but even so Head Coach Kevin Sumlin has been rumored to be on a very hot seat.

The LSU Tigers are 6-4 this season and because of a cancelled game they will only be playing 11 this season. LSU appeared to be rolling but now they have lost 2 of their last 3 including a heartbreaker last week against Florida. The LSU offense is averaging 25.7 points and 406.1 yards per game and they have turned the ball over 16 times. Tigers QB Danny Etling has completed 58.5 percent of his passes with 7 touchdowns and 4 interceptions. Derrius Guice is LSU’s top rusher with 964 yards and 10 touchdowns as the career of Leonard Fournette could be over in Baton Rouge and Malachi Dupre is the top receiver with 30 catches and 2 touchdowns and Travin Dural has 28 catches and a touchdown. The LSU defense is allowing 14.1 points and 308.1 yards per game with 9 interceptions, 6 fumble recoveries, and 26 sacks. LSU’s leading tackler Kendell Beckwith left the field last week so that leaves Duke Riley as the top tackler with 81, jamal Adams has 65 tackles, and Arden Key has 10 sacks. LSU will be looking for a head coach in earnest as after last week’s loss it is unlikely Ed Orgeron will be retained.

LSU is favored by 5 here but I personally don’t see it with it being a night game at home for the Aggies. The best way to beat LSU is to hit them and look for the Texas A&M defense to do that here.