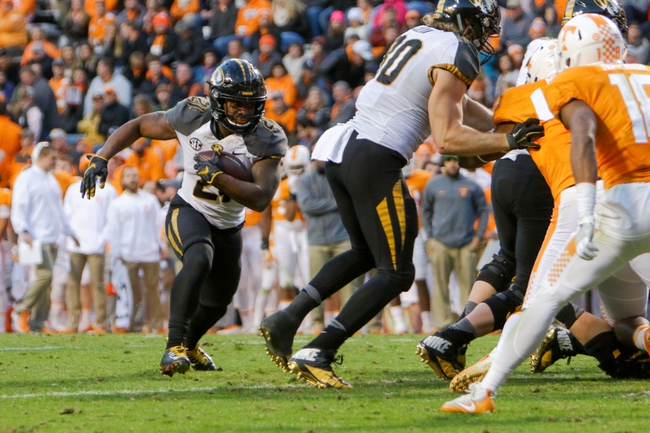 The Missouri Tigers and the Arkansas Razorbacks face off on Friday in SEC college football action.

The Missouri Tigers are 3-8 this season as they have fallen off of a cliff in the first year of the post Gary Pinkel era. The Missouri offense is averaging 31.7 points and 509.7 yards per game and they have turned the ball over 22 times. Mizzou QB Drew Lock has completed 54.2 percent of his passes with 22 touchdowns and 10 interceptions. Damarea Crockett leads Missouri in rushing with 1.062 yards and 10 touchdowns and J’Mon Moore has 56 catches and 8 touchdowns. The Missouri defense is allowing 32.2 points and 477.5 yards per game with 13 interceptions, 5 fumble recoveries, and 23 sacks. Donavin Newsom is the Tigers top tackler with 71, Charles Harris has 58 tackles including 9 sacks, and Thomas Wilson has 52 tackles. Missouri just hasn’t gotten bounces to go their way and they haven’t’ created a lot of chances for themselves by staying close enough in games.

The Arkansas Razorbacks are 7-4 this season and they are coming off of a blowout win over Mississippi State. The Arkansas offense is averaging 31.5 points and 432 yards per game and they have turned the ball over 19 times. Razorbacks QB Austin Allen has completed 61.3 percent of his passes with 22 touchdowns and 10 interceptions. Rawleigh Williams leads Arkansas in rushing with 1,209 yards and 11 touchdowns and Drew Morgan is the top receiver with 55 catches and 3 touchdowns. The Razorbacks defense is allowing 31 points and 431.4 yards per game with 9 interceptions, 9 fumble recoveries, and 19 sacks. Brooks Ellis leads the Hogs defense with 75 tackles, Josh Liddell has 56 tackles, and Jeremiah Ledbetter has 43 tackles. Arkansas is looking for their first back-to-back wins in 2 months.

I am looking for any reason I can to take the home dog and the points here but I can’t seem to find it including that it is Senior Day at Mizzou so I don’t have any other choice but to lay the points with Arkansas.