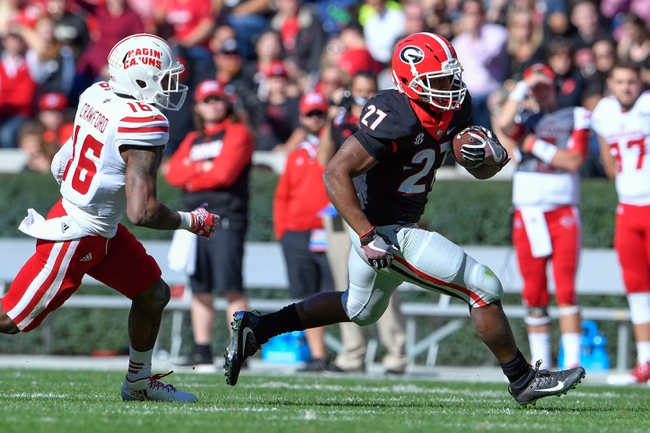 The Georgia Bulldogs are 7-4 this season and are playing their final game of the regular season so for them this one is all about bowl positioning, as well as beating their rival. The Georgia offense is averaging 23.7 points and 380.6 yards per game and they have turned the ball over 16 times. Bulldogs QB Jacob Eason has completed 55.3 percent of his passes with 13 touchdowns and 6 interceptions. Nick Chubb leads the Georgia rushing attack with 900 yards and 6 touchdowns and Isaiah McKenzie is the top receiver with 38 catches and 6 touchdowns. The Georgia defense is allowing 23.7 points and 322.4 yards per game with 14 interceptions, 9 fumble recoveries, and 23 sacks. Roquan Smith leads the Dawgs in tackles with 69, Natez Patrick has 55 tackles, and Malkolm Parrish has 48 tackles. It has been an up and down season and despite losing to the better teams in the SEC if they can win and get to an 8-4 record it would be a solid season for Georgia.

The Georgia Tech Yellow Jackets are 7-4 this season and they have won 4 of their last 5 games. The Georgia Tech offense is averaging 27.8 points and 388.5 yards per game and they have turned the ball over 13 times. Yellow Jackets QB Justin Thomas has completed 54 percent of his passes with 8 touchdowns and 1 interception and he has rushed for 552 yards and 5 touchdowns. Marcus Marshall has rushed for 569 yards and 3 touchdowns for GT and Ricky Jeune has 22 receptions and 1 touchdown. The Georgia Tech defense is allowing 24.8 points and 408.6 yards per game and with 9 interceptions, 7 fumble recoveries, and 16 sacks. Corey Griffin leads Georgia Tech with 73 tackles, Brant Mitchell has 60 tackles, and A.J. Gray has 58 tackles. Georgia Tech is also working on bowl positioning and of course knocking off their in-state rival.

This one looks like another close one and getting better than a field goal I like getting the points so my play here is Georgia Tech.