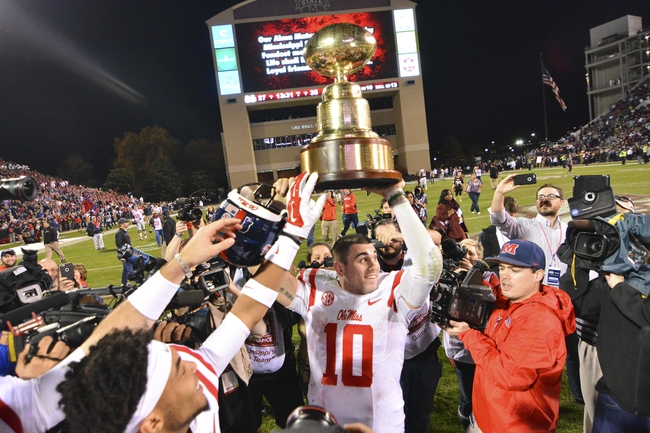 The Ole Miss Rebels and the Mississippi State Bulldogs face off on Saturday in the 2016 version of the Egg Bowl in a SEC college football rivalry game.

The Ole Miss Rebels are 5-6 this season and they are a win away from being bowl eligible. The Mississippi offense is averaging 33.7 points and 459 yards per game and they have turned the ball over 17 times.  Shea Patterson has taken over at QB for the Rebels for the injured Chad Kelly and he has completed 53.6 percent of his passes with 4 touchdowns and 1 interception. Akeem Judd is Ole Miss’ top rusher with 719 yards and 6 touchdowns and Evan Engram is the top receiver with 65 catches and 8 touchdowns and Van Jefferson has 44 catches and 3 touchdowns. The Mississippi defense is allowing 32.1 points and 453.1 yards with 8 interceptions, 7 fumble recoveries, and 19 sacks. DeMarquis Gates is the Rebels top tackler with 75 including 4 sacks, Zedrick Woods has 58 tackles, and Marquis Haynes has 44 tackles including 6 sacks. It has been a major disappointment of a season for Ole Miss but a win over their rivals could heal a lot of the pain.

The Mississippi State Bulldogs are 4-7 this season and their uninspired offensive play calling has led to one of their worst seasons in recent memory. The Mississippi State offense is averaging 29.4 points and 438.4 yards per game and they have turned the ball over 15 times. MSU QB Nick Fitzgerald has completed 55 percent of his passes with 18 touchdowns and 10 interceptions and he has rushed for 985 yards and 12 touchdowns. Aeris Williams is Mississippi State’s top running back with 465 yards and 2 touchdowns and Fred Ross is the top receiver with 67 catches and 11 touchdowns. The Mississippi State defense hasn’t been good enough allowing 34.3 points and 455.2 yards per game with 11 interceptions, 8 fumble recoveries, and 21 sacks. Richie Brown leads the Bulldogs in tackles with 89, Leo Lewis has 66 tackles, and Johnathan Calvin has 5 sacks. Outside of their win over Texas A&M Mississippi State hasn’t been able to compete against even the mediocre teams.

These are two teams that have a lot of holes so we are going to see some positive and negative plays we can’t possibly predict but overall Ole Miss is the better team and they seem to bring a much better game plan to the table on a consistent basis.