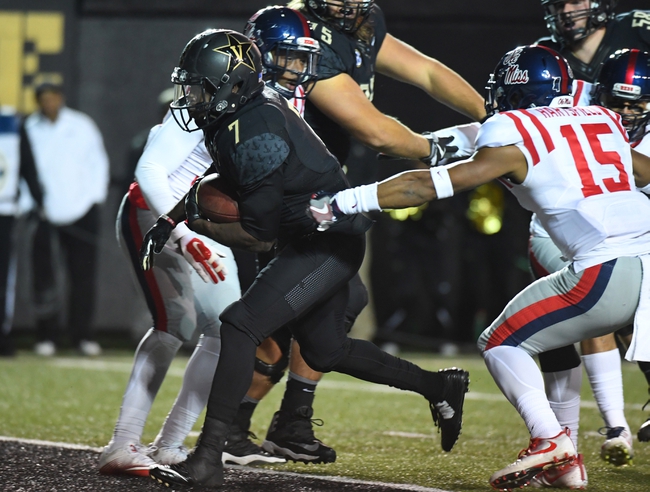 The Vanderbilt Commodores and the Tennessee Volunteers face off on Saturday in Nashville in an in-state rivalry game in the SEC.

The Vanderbilt Commodores are 5-6 this season and they need a win in this one to become bowl eligible. The Vandy offense is averaging 21.5 points and 336.5 yards per game and they have turned the ball over 11 times. Commodores QB Kyle Shurmer has completed 55.6 percent of his passes with 7 touchdowns and 6 interceptions. Ralph Webb leads the Vanderbilt rushing attack with 1058 yards and 10 touchdowns and C.J. Duncan is the top receiver with 37 catches. The Vanderbilt defense is allowing 21.5 points and 401.3 yards per game with 5 interceptions, 11 fumble recoveries, and 13 sacks. Zach Cunningham leads the Commodores with 109 tackles, LaDarius Wiley has 68 tackles, and Ryan White has 60 tackles. Vanderbilt is coming off of a blowout win over Ole Miss so their confidence should be sky high and they won’t be lacking any motivation.

The Tennessee Volunteers are 8-3 this season and they have won their last 3 games in a row. The Tennessee offense is averaging 36.5 points and 430.1 yards per game and they have turned the ball over 23 times. Volunteers QB Joshua Dobbs has completed 60 percent of his passes with 24 touchdowns and 12 interceptions and he has rushed for 660 yards and 9 touchdowns. Alvin Kamara leads the Tennessee rushing attack with 496 yards and 7 touchdowns and Josh Malone has 38 catches and 9 touchdowns and Jauan Jennings has 30 catches and 7 touchdowns. The Tennessee defense is allowing 27.8 points and 446.7 yards per game with 10 interceptions, 12 fumble recoveries, and 25 sacks. Todd Kelly Jr. leads the Vols defense with 67 tackles, Colton Jumper has 59 tackles, and Derek Barnett has 11 sacks. Tennessee was thinking SEC Championship Game and a spot in the CFB Playoff so this season has been a disappointment for them.

This just looks like a ton of points and with Tennessee’s sloppy road play as far as putting the ball on the ground I don’t see how they come close to covering this number. Tennessee’s lone road win this year came on a last play Hail Mary at Georgia and I don’t see them being that fortunate here as Vandy goes bowling.

The pick in this article is the opinion of the writer, not a Sports Chat Place site consensus.
Previous Pick
California Golden Bears vs. UCLA Bruins - 11/26/16 College Football Pick, Odds, and Prediction
Next Pick
Florida State Seminoles vs. Florida Gators - 11/26/16 College Football Pick, Odds, and Prediction