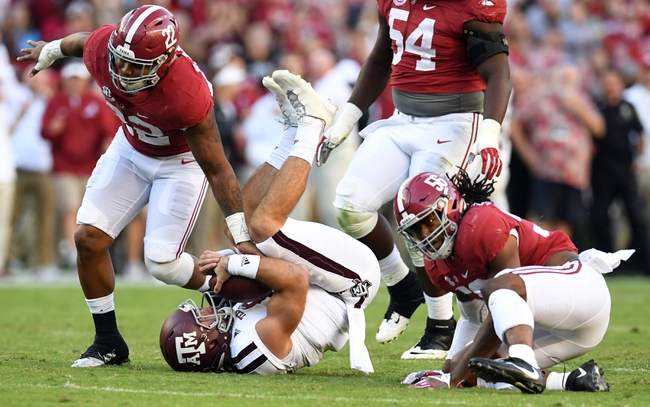 The Florida Gators and the Alabama Crimson Tide face off on Saturday in the SEC Championship college football game.

The Florida Gators are 8-3 this season which was good enough to win the SEC East but they are coming off of a loss against their rivals Florida State. Florida was without 8 of their starters in the loss to FSU and they will be missing most of those payers in this one as well. The Gators offense is averaging 24.1 points and 352.7 yards per game and they have turned the ball over 17 times. UF QB Austin Appleby has completed 60 percent of his passes with 6 touchdowns and 2 interceptions filling in for the injured Luke Del Rio. Jordan Scarlett anchors the Florida rushing attack with 778 yards and 6 touchdowns and Antonio Callaway is the top receiver with 43 catches and 2 touchdowns. The Gators defense has carried the team allowing 14.6 points and 291.9 yards per game with 13 interceptions, 8 fumble recoveries, and 28 sacks. Marcell Harris leads the Florida defense is tackles with 57, Jarrad Davis has 56 tackles but he is day to day and has missed the last 3 games, and David Reese is the next highest in tackles of active players with 48 as Marcus Maye and Alex Anzalone are both out. Florida is going to have to find answers and work around big injuries of star players to hope to compete in this game.

The Alabama Crimson Tide are 12-0 this season and ranked number one in the nation as they continue they simply wore down the Tigers late. The Alabama offense is averaging 39.4 points and 479.6 yards per game and they have turned the ball over 19 times. Crimson Tide QB Jalen Hurts has completed 65.8 percent of his passes with 20 touchdowns and 9 interceptions and he has rushed for 840 yards and 12 touchdowns. Damien Harris is Alabama’s top rusher with 897 yards and 2 touchdowns and Calvin Ridley has 61 receptions and 7 touchdowns and ArDarius Stewart has 49 catches and 7 touchdowns. The Alabama defense is allowing 11.4 points and 246.8 yards per game with 11 inbterceptions, 10 fumble recoveries, and 41 sacks. Reuben Foster is Bama’s top tackler with 83, Minkah Fitzpatrick has 4 interceptions, Tim Williams has 8 sacks, Ryan Anderson has 7.5 sacks, and Jonathan Allen has 7 sacks and has blown up game plans. No one has come close to beating Alabama this season but they have been in this position before.

Alabama has been impossible to stop so far this season and I don’t expect the Gators to walk away with a win but with all of their injuries and with the world thinking they can’t do it I would expect Florida to make a stand here and at least cover this generous spread.