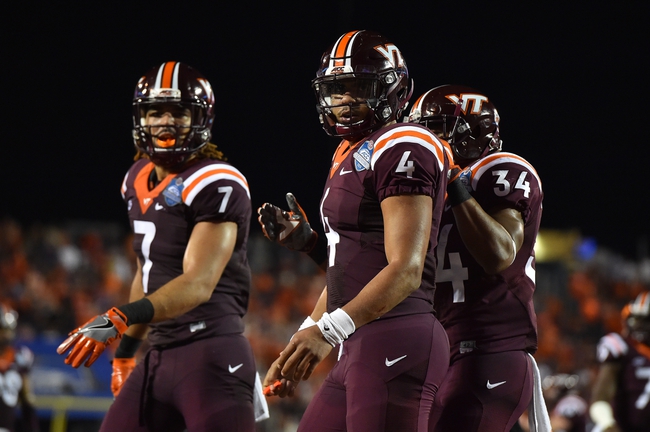 In the Belk Bowl on Thursday, December 29 at Bank of America Stadium in Charlotte, North Carolina, the Arkansas Razorbacks and the Virginia Tech Hokies will be meeting up in college football activity.

Arkansas comes in with a 7-5 record on the year, alternating wins with losses in their final 10 games. The Razorbacks’ most recent game was a 28-24 loss to Missouri, and in that one QB Austin Allen went 24-of-39 for 348 yards and a TD but also had two picks.

On the year, Allen sits on 3152 yards with 23 touchdowns and 12 interceptions, while Rawleigh Williams III leads Arkansas in rushing on 233 carries for 1326 yards and 12 scores. Drew Morgan is the Razorbacks’ top receiver with 664 yards, 61 catches and three TDs.

Over on the the Virginia Tech side, they’re entering the Belk Bowl with a 9-4 mark this year. Virginia Tech won two of their final three games and five of their last seven, but dropped their finale to Clemson 42-35. In that one, Hokies QB Jerod Evans went 21-of-35 for 264 yards, one TD and two picks, but rushed for a pair of scores.

On the season, Evans has 3309 yards passing with 27 touchdowns, and also leads the Hokies in rushing with 182 carries for 759 yards and 10 scores. Isaiah Ford is tops in receiving for Virginia Tech, with 73 catches for 1038 yards and seven touchdowns.

Depending on which Virginia Tech team we see, this could be a rousing victory or a tough dogfight. The Hokies haven’t been especially consistent this year, and lean on Evans to do most of the heavy lifting. That said, they’ve stood tall against some solid competition this year and I think the Hokies can get it done here.