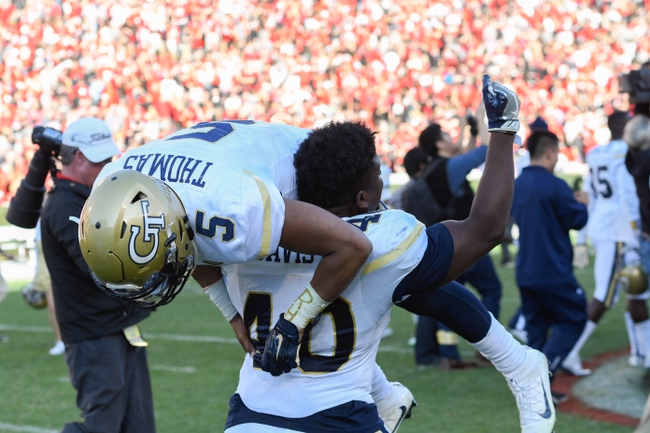 Coming up on Saturday, December 31 from EverBank Field in Jacksonville, Florida, we’ve got college football action in the TaxSlayer Bowl between the Georgia Tech Yellow Jackets and the Kentucky Wildcats.

Georgia Tech enters play here with an 8-4 record, rebounding from a three-game losing streak to win five of their last six games. That most recent game was a 28-27 nail-biter against Georgia, during which the Yellow Jackets racked up 226 yards and four touchdowns on the ground.

On the year, Georgia Tech QB Justin Thomas sits on 1454 yards with eight touchdowns and two picks, while Marcus Marshall has 624 yards and four touchdowns on 96 carries to lead the rushers. Clinton Lynch is the Yellow Jackets’ top receiver with 16 catches for 490 yards and six scores.

Kentucky comes into this game at 7-5 on the season, bagging five wins in their final seven games to qualify for a Bowl bid. Kentucky’s most recent win was a 41-38 squeaker over Louisville, and in that one QB Stephen Johnson put up a 16-of-27 line for 338 yards and three scores.

On the season, Johnson holds 1862 yards with 12 touchdowns and six picks, while Stanley Williams is tops for Kentucky in rushing with 160 carries for 1135 yards and seven scores. Jeff Badet is the Wildcats’ top receiver on 28 catches for 639 yards and four scores.

It’s pretty easy to see what the game plan will be here for both sides: run, run, and run some more. Neither the Jackets nor the Cats have much going on in the passing game, so it’s going to be a heavy dose of ball control. That said, Kentucky’s running game is marginally better than Georgia Tech’s (the top two Wildcat rushers each have over 1,000 yards and 20 combined touchdowns) and the finale win over Louisville should give the team some momentum coming in. I’ll take Kentucky to cover and win outright.