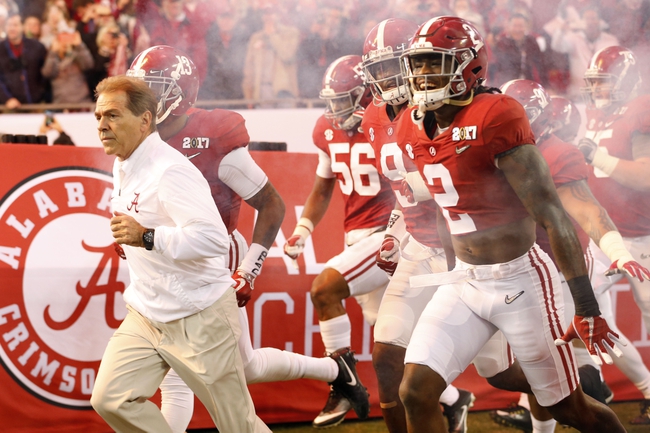 The Alabama Crimson Tide enter another college football season where they’re the favorite to win the national title. With Nick Saban, a loaded defense and no more quarterback concerns, Alabama remains the team to beat and should have another successful season that includes double-digit victories.

Offense: Unlike recent years, Alabama heads into this season knowing who its quarterback is, and that’s Jalen Hurts. He finished last season with 23 touchdown passes and a completion percentage of nearly 63 percent, and seemed to get better as the season went on, which is always a positive for a younger player. Damien Harris is coming off a 1,000-yard season at running back and Bo Scarbrough was turning into a monster before breaking his leg against Washington. The Tide do lose tight end O.J. Howard, but Alabama does return its top two receivers in ArDarius Stewart and Calvin Ridley, a duo that combined for more than 1,600 receiving yards and 15 touchdowns. Alabama also has experience and stability along the offensive line with Bradley Bozeman, Ross Pierschbacher and Jonah Williams all coming off promising seasons. This offense should compete with last years unit that averaged 38.8 points per game.

Defense: Alabama’s defense always starts with the front, and that will be anchored by Da’Ron Payne, who has All America potential. Theres also depth for days with Isaiah Buggs, Raekwon Davis, Da’Shawn Hand and Joshua Frazier rotating in and out. There’s inexperience at the linebacker positions, but Shaun Dion Hamilton was one of the Tide’s top tacklers before getting hurt. Mack Wilson is versatile and Christian Miller has the potential to be a breakthrough player his junior season. Minkah Fitzpatrick is a versatile defensive back who finished fourth on the team in tackles, while Anthony Averett started every game at cornerback and broke up eight passes. Ronnie Harrison also returns as the second-leading tackler and plans to take on more of a leadership role this season.

Special Teams: JK Scott returns at punter after averaging 47.1 yards on 64 attempts. Andy Pappanastos will take over at kicker after making his only field goal attempt and all six extra points last season.

Outlook: We know Alabama is going to be great defensively, the concern has always been can the offense match the defense and not get caught going several drives in a row not scoring. With Hurts at QB and the weapons around him, this has a chance to be one of the more balanced teams Saban has had at Alabama. You know what to expect with the Crimson Tide in terms of defense and the coaching, but having an offense that can score 30-plus easily, makes this team that much scarier. I wouldn’t touch a futures bet due to the low line of +300 (I need bigger odds with my money tied up for months), but you should expect to see Alabama in the college football playoff once again.