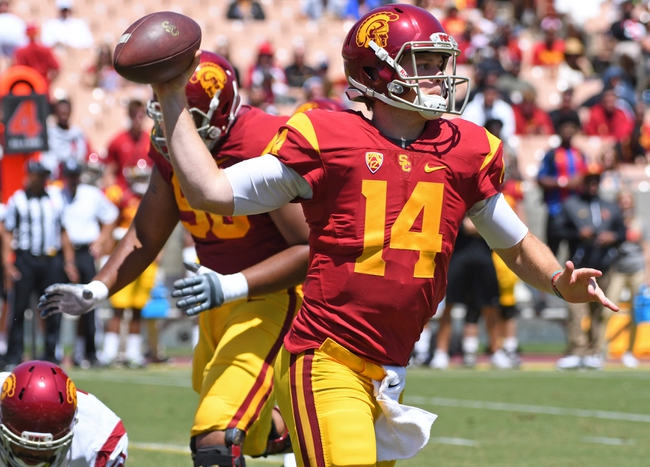 The USC Trojans hope to build on their first double-digit winning season since 2013 and have goals of winning the national championship with the amount of talent returning. It may be safe to say USC is back, which is scary for the rest of the Pac-12.

Offense: USC has one of the top quarterbacks in the country in Sam Darnold, who completed 67.2 percent of his passes for more than 3,000 yards and 31 touchdowns. Darnold is a big reason why many are so high on USC this season. Ronald Jones II rushed for more than 1,000 yards and 12 touchdowns despite just 177 carries, and he’ll make a case as one of the top running backs in the country this season. Receiver is a bit of a question mark with JuJu Smith-Schuster and Darreus Rogers gone, but Deontay Burnett was highly productive last season with 56 catches and there’s tons of upside with Josh Imatorbhebhe. The USC offensive line has two anchors in Nico Falah and Viane Talamaivao, but the tackle positions are up in the air. The Trojans offensive line is the x-factor to making this USC offense absolutely deadly.

Defense: USC returns its leading sacker in Rasheem Green, but will have to find a new leader with Stevie Tu’ikolovatu no longer around. Josh Fatu showed promise late last season and getting Kenny Bigelow back from injury is big for the reshuffling defensive line. The Trojans should be fine at linebacker with a trio of their top tacklers in Porter Gustin, Cameron Smith and Uchenna Nwosu returning. The secondary does have holes to fill with Adoree' Jackson gone, but Jack Jones proved he’s capable of stepping up and a safety combination of Chris Hawkins and Marvell Tell III is one of the better pairs you’re going to find in college football. Like the offense, there's a lot to like with this USC defense.

Special Teams: Chris Tilbey returns at punter after averaging 38.3 yards on 50 attempts. Matt Boermeester will return at kicker if he’s allowed back on the team due to off-the-field issues. If not, redshirt freshman Michael Brown will likely take over place kicking duties.

Outlook: USC always has overwhelming talent on both sides of the ball, making the Trojans a dark horse title contender every season. It’s the fact USC has a proven and one of the top quarterbacks that puts this season over the top. Because Darnold is capable of putting up 40 points any game makes USC legit and capable of winning anywhere against anybody. The talent was always there, but with USC, it’s all about the consistent QB play that puts this program in the title picture. Darnold has a large enough sample size to say he’s the best this school has had in awhile. Teams with elite quarterbacks are always treated as contenders and USC is in the picture because of that this season. Anything less than a Pac-12 title and trip to the college football playoff would be considered a disappointment for the Trojans.