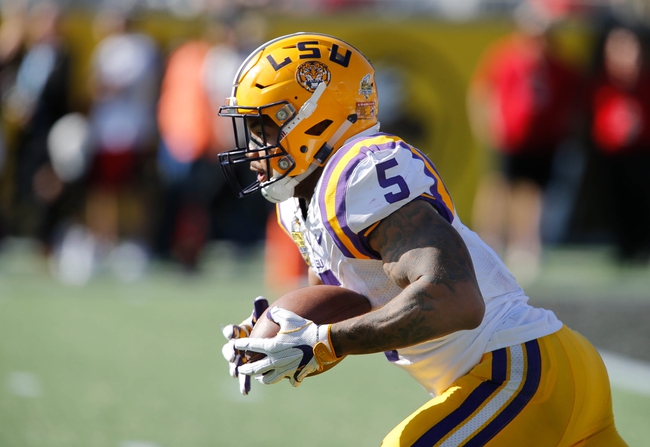 The LSU Tigers have not won double-digit games since 2013 and will begin a new era with Ed Orgeron at head coach full time. It’s certainly going to be an interesting season in Baton Rouge, but of course, expectations remain the same and folks want to compete for national championships. LSU is tired of playing second fiddle with the Alabama Crimson Tide.

Can Orgeron sprinkle some magic?

Offense: LSU has its experienced quarterback in Danny Etling, who completed just under 60 percent of his passes for 2,100 yards and 11 touchdowns. A year under his belt and more comfortability with the playbook could help Etling have his most productive season of his college career. The loss of running back Leonard Fournette doesn’t hurt as much when you consider Derrius Guice had more rushing yards than him last season and enters this year as a live Heisman candidate. Guice is the real deal and will instill fear in SEC defenses. LSU is thin at wide receiver, but D.J. Chark has No. 1 potential after catching 26 passes last season and Russell Gage showed his potential against Texas A&M with five catches and a touchdown. Still, depth needs to be found on the outside. The Tigers also have an experienced offensive line with K.J. Malone returning at left tackle, Will Clapp taking over at center and Garrett Brumfield holding down the right side. LSU has the potential to have an above-average offense in the SEC, it all comes down to how much Etling improves at QB.

Defense: Another year of LSU losing its top defensive players either to graduation or the NFL draft, forcing Dave Aranda to make some magic happen before August. The good news is there’s a lot of young talent on this side of the ball as usual. Linebacker Arden Key finished with 12 sacks last season and has the potential to be a top-10 pick in next years draft if he follows up on last season. Linebacker Devin White came on strong late in the year and forms a nice tandem with Key. the defensive line gets a boost with Christian LaCouture returning from injury while Ed Alexander is a talented defensive tackle who should breakout after limited playing time as a freshman. The secondary could be the best unit on this LSU defense, as Donte Jackson has lockdown potential at cornerback, John Battle is a tackling machine at safety and Kevin Toliver showed bright spots when he was actually on the field. While there’s youth with this LSU defense, there’s 4 and 5-star recruits everywhere you look, so this side of the ball should be fine and will get better the deeper we get into the season.

Outlook: The LSU Tigers are pretty much the same every season, as you know the defense is going to be great, the offensive line will be physical and the ground game will have success. It just comes down to the quarterback play that puts LSU over the top. Etling has seen it all playing for Purdue and LSU, so is he ready to take that next step and lead a team to the college football playoff? If so, LSU will be in the thick of things in the SEC and have a chance to sneak into the CFP if everything goes well. I like this LSU team and think its odds to win the title are playable, especially with a favorable schedule.