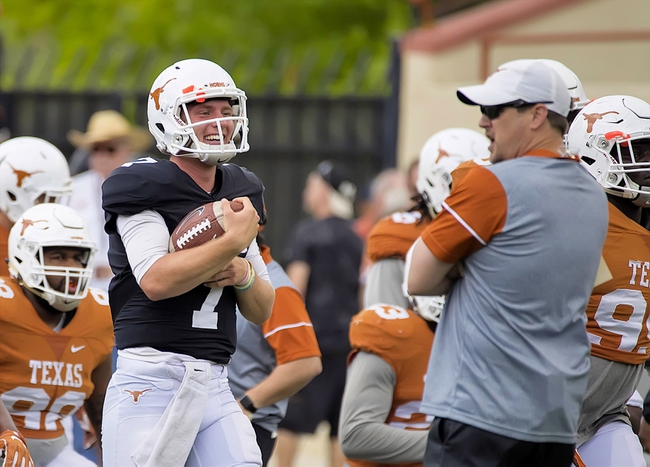 The Texas Longhorns begin a new era with Tom Herman replacing Charlie Strong at head coach, and he hopes to turnaround a program that hasn’t won double-digit games since 2009. We know fans in Austin have limited patience, so it’s going to be interesting to see how things play out and how long his leash is.

For Herman, he hopes he can hit the ground running like he did for the Houston Cougars.

Offense: Shane Buechele returns at quarterback after throwing for nearly 3,000 yards and 21 touchdowns as a freshman. Buechele had his struggles toward the end of the season, but he was reliable for the most part and showed he's capable of making big plays and giving this offense confidence. The Longhorns lose a 2,000-yard rusher in D’Onta Foreman, but a combination of Chris Warren III and Kyle Porter gives Texas a decent backfield capable of getting the job done. Texas is deep at wide receiver and returns its top three options from last season in Armanti Foreman, Devin Duvernay and Dorian Leonard, a trio that combined for more than 1,200 yards and nine touchdowns. As for the offensive line, there's likely going to be growing pains due to the overall youth of this unit. Brandon Hodges is the only upperclassman projected starter in a group that includes Zack Shackelford, Patrick Vahe and Jake McMillon.

Defense: The Texas Longhorns return 10 starters from a defense that was 94th in the country in yards allowed per game, which could be a good or bad thing. The good news is it brings experience and cohesiveness to the unit, the bad news is this Longhorns defense was torched for much of the season. Texas returns its top eight tacklers from last season, including Breckyn Hager and Malik Jefferson, a duo that combined for more than 120 tackles and 11.5 sacks. Anthony Wheeler will anchor down a talented group of linebackers and Malcolm Roach should be able to build on what was a successful freshman season. Cornerback John Bonney has improved each season he’s been on the team and safety Jason Hall has been very effective when he’s not injured. There’s a lot to like with this group now that there’s more experience and with a coach like Herman who brings energy and confidence, this should be one of the more improved defenses in the country given how bad it was last season.

Outlook: There’s only two schools that return more starters than Texas, and lots not forget the Longhorns had their moments last season when beating a highly ranked Notre Dame, Baylor and going toe-to-toe with Oklahoma. Its no secret Texas is talented and with the right coach can do some serious damage. If Herman can win in Houston with less talent, it’s fair to expect big things in Austin where there’s four and five star recruits everywhere. What does that do for this season, who knows? However, I wouldn't be shocked if the Longhorns are competing for a Big 12 title if everything goes well. I also wouldn't be surprised if this is a transition period and results in eight or nine wins, as building takes time. It's hard to have a pulse on this team heading into the new season.