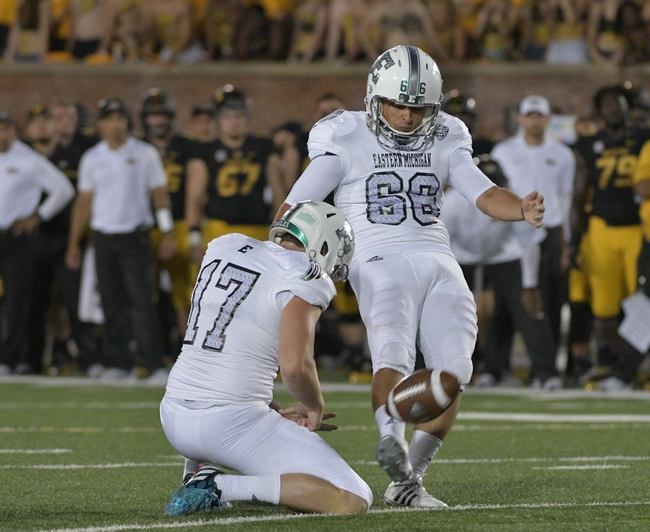 The Eastern Michigan Eagles surprised the world of college football with a Bowl appearance last season so does the team have enough gas in the tank for a repeat performance in 2017?

Overview: Chris Creighton and the Eastern Michigan Eagles ended decades of futility with a Bowl game and a winning record a year ago so for the first time in memory the team has expectations and enough talent back at the skill positions to keep the momentum going.

Offense: The Eastern Michigan Eagles survived the loss of running back Shaq Vann to injury in 2016 and quarterback Brogan Roback to suspension for the first two games. EMU gets both back for a full year and hopes Roback continues to avoid sacks and turnovers while distributing the ball in the passing attack. The Eagles get back receivers Dieuly Aristilde, Sergio Bailey and Antoine Porter which should give Roback enough weapons to consistently move the chains through the air. A healthy Vann (if 100%) gives Eastern Michigan a strong runner and if he needs a break, backup Ian Eriksen showed he has the grit to produce which he did when Vann missed 2016. The wild card for the Eagles is the offensive line who need to break in several players and stay healthy or the outlook for the offense won’t be as rosy.

Defense: The Eagles haven’t had a whole lot of success stopping opposing offenses but showed enough improvement to at least be a competitive unit which was a positive. Unfortunately, Pat O’Connor is gone and takes 14.5 TFL including 8.5 sacks with him which will be difficult, if not impossible to replace. Defensive ends Maxx Crosby and Jeremiah Harris did get in to the backfield as witnessed by their combined 14.5 TFL and five sacks but the linebacking unit struggled to get behind the line of scrimmage with around nine TFL. The Eagles secondary looks set at the safety position with Ikie Calderon, Jason Beck and Vince Calhoun back while Jalen Phelps and Kevin McGill will step in to bigger roles at cornerback.

Special Teams: Eastern Michigan punter Austin Barnes averaged over 43 yards per boot and Paul Fricano was deadly on field goals up to 40 yards but a boost in punt and kick returns is needed.

Outlook: If we look at Eastern Michigan we see the team has many faces back from last season’s Bowl team so many will say another postseason appearance is there for the taking. While I agree, the Eagles need to prove their 2016 success can be sustained and I’ll sit back and wait for that to happen and root for the perennial underdog.