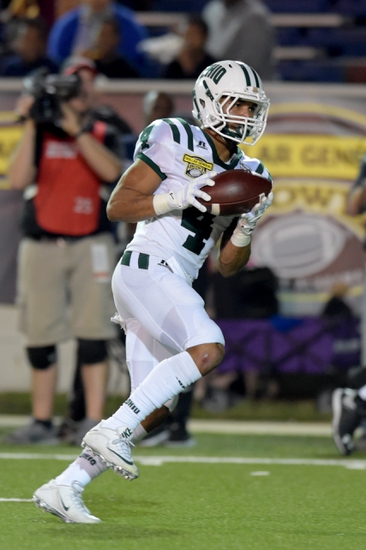 The 2017 Ohio Bobcats  look for another MAC East title and Bowl invitation.

Overview: Frank Solich and his Ohio Bobcats are sometimes overlooked but if the offense can step up and help out the defensive side of the football then this team can’t be counted out.

Offense: The Ohio Bobcats will give the reins of the offense to quarterback Quinton Maxwell who showed great potential at times as a freshman in 2016 although he made too many mistakes which cost him a shot at leading the team in the conference championship game and their Bowl.  The Bobcats do need somebody to step up at receiver with the top three options graduating leaving Elijah Ball, Papi White and tight end Troy Mangen as the likely candidates with several recruits hoping to make an impact. AJ Ouellette, Maleek Irons and Dorian Brown give Ohio options on the ground which might be forced to carry the load if the passing attack falters. The Bobcats return three  starters on the offensive line although five players have starting experience.

Defense: The Bobcats were a solid defensive squad in 2016 despite replacing most of the secondary which also fell victim to the injury bug. The Bobcats could rush the quarterback but that could be an area of concern in 2017 with five of the top seven on the defensive line graduating. This unit was deep so the returning players have saw the field but Ohio now needs depth to prevent problem spots if somebody gets hurt. If the D-Line holds up then the Bobcats bring back experience at linebacker in Chad Moore and Quentin Poling. The Ohio secondary is loaded with young players that saw action a season ago with cornerback Kylan Nelson and safety Javon Hagan leading the group with a combined six interceptions.

Outlook: If you follow Ohio Bobcats football, their best weapon could be flying under the radar before pouncing on somebody and squeezing out a win. The Bobcats have concerns at quarterback and at receiver on offense and the line is a worry on defense but the potential is there for another Bowl and MAC East crown.