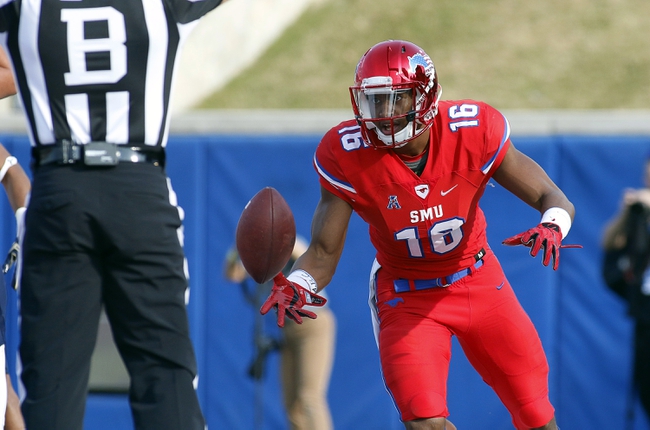 We’re inching closer and closer to the 2017 college football season, which means you’re running out of time to do your homework. If you hope to make a profit this season and crush the bookies, you should already have a good idea of what’s what before the season even starts. This article, I’m looking at the best wide receivers in the country, guys who open up the field and get those chunk yardage plays.

If a team has one of these players, there’s a good chance that offense is going to be explosive.

Here are the top 10 wide receivers heading into the 2017 college football season.

1. James Washington, Oklahoma State Cowboys - James Washington has topped 1,000 receiving yards the last two seasons and has combined for 26 touchdowns in his career. Washington could have easily left for the NFL last year, but him and QB Mason Rudolph will terrorize the Big 12 for one more season.

2. Christian Kirk, Texas A&M Aggies - Christian Kirk is lighting in a bottle, as he caught 85 pass last season for 928 yards and nine touchdowns, but he also makes plays in the return game and has five special teams touchdowns. Kirk is one of those guys you want with the ball as much as possible and Texas A&M is likely going to follow that game plan this season.

3. Courtland Sutton, SMU Mustangs - Courtland Sutton is getting the most love from NFL scouts, as his 6’4” frame and athleticism makes him a first round pick. As for his production, Sutton is coming off a season in which he had 1,246 yards and 10 touchdowns on 76 receptions.

4. Calvin Ridley, Alabama Crimson Tide - In two years at Alabama, Calvin Ridley has 161 receptions, 1,814 receiving yards and 14 touchdowns. If the Crimson Tide can get more consistency from the quarterback position, Ridley will have his best season yet in Tuscaloosa.

5. Dante Pettis, Washington Huskies - Dante Pettis had at least one touchdown in eight of Washington’s last 11 games and has five career punt return touchdowns. Pettis is simply a difference maker when he touches the ball and is one of the better route runners in the country as well.

7. Antonio Callaway, Florida Gators - Antonio Callaway doesn’t get much love due to Florida’s inability to find a quarterback, but that may change with Malik Zaire now in town. Even with the struggles, Callaway has 89 receptions, nearly 1,400 receiving yards and seven touchdowns in three years. His hands and athleticism make him an NFL prospect. Now, just get the guy a QB.

8. Allen Lazard, Iowa State Cyclones - Allen Lazard has gotten better in each of his three seasons at Iowa State and has combined for 16 receiving touchdowns. Lazard finished last year topping 100 yards in four of his last five games, and his 6’5” frame is tough for Big 12 defenders to matchup.

9. Deon Cain, Clemson Tigers - Deon Cain only had 38 receptions last year, but his average of 19.05 yards per catch was tied with Dede Westbrook for 20th in the country. Cain is a speedster, playmaker, and it’ll be fun to see what he can do as the No. 1 option now that Mike Williams has moved to the NFL.