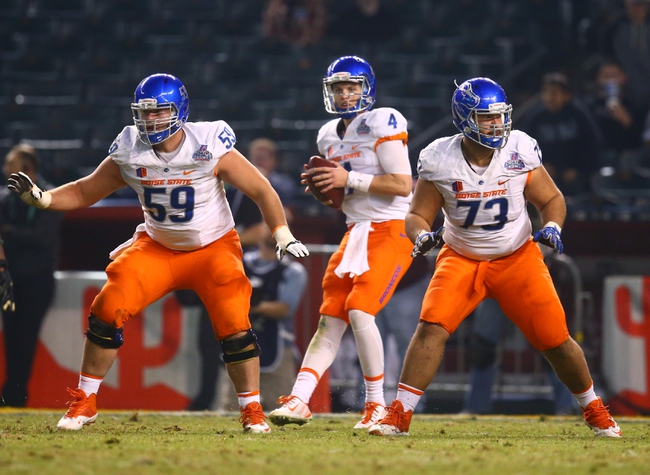 The Boise State Broncos will be gunning for their first MWC title in three seasons in 2017.

Overview: Head coach Bryan Harsin has done nothing but win at his alma mater but the Boise State Broncos are no longer a factor on the national scene and have not won the Mountain West in back to back seasons so the question is whether some key losses on both sides of the ball are filled and helps the team return to prominence.

Offense: Whatever questions the Boise State Broncos might have on offense, quarterback Brett Rypien isn’t one of them as one of the best signal callers in the game. However, will Rypien be as productive with three of his top receiving targets gone with Chaz Anderson, Jeremy McNichols and Thomas Sperbeck taking almost 150 receptions and over 2,000 yards to graduation? Cedric Wilson is the number one after totaling over 1,100 yards in catches in 2016 with Akilian Butler, AJ Richardson and Sean Modster in the mix but after Wilson the Boise State receiving corps is unproven. With McNichols gone in the rushing attack, the Broncos will lean on Ryan Wolpin and Alexander Mattison but neither has shown any big play ability which might be an even bigger worry with just two starters back on the line.

Defense: The Boise State Broncos return the bulk of their defensive line although the team needs to add some depth and establish a rotation because an injury or two would be a huge setback. The Boise front was not exceptionally strong or weak in most areas and needs to meet or exceed their production of last season because there will be new faces at linebacker and the secondary which means injuries and inexperience could cause some growing pains. Blake Whitlock and Leighton Vander Esch did show potential as back ups and Vander Esch was hurt the latter half of 2016 so potential would describe this unit. The Boise State secondary was decent a season ago and despite some losses have plenty of highly ranked athletes available so this group might not miss a beat.

Special Teams: The Broncos hand over the reins of the kicking game to Joel Valezquez for punting and placekicking and right now, Cedrick Wilson is listed as the primary returner.

Outlook: Many simply pencil in Boise State as the best team in the Mountain West and that was the case several years ago. While I still believe this team is more then capable of winning the conference, I’d say the Broncos are an obvious challenger that has less room for error then in previous seasons.