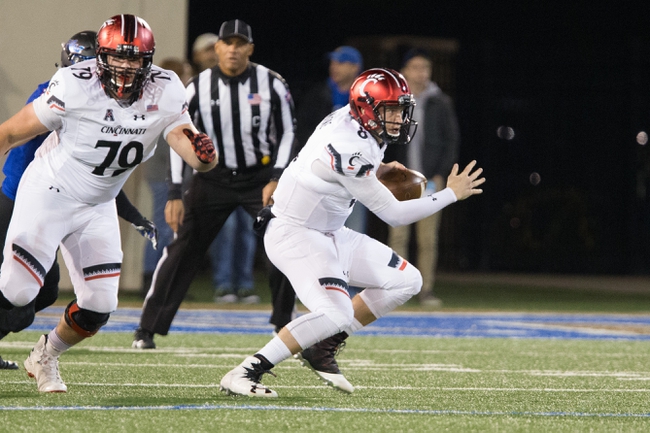 The Austin Peay Governors have nowhere to go but up after finishing 0-11 last year and not winning a game overall since October of 2014. The good news is the Governors have their quarterback in playmaker JaVaughn Craig, who threw for six touchdowns and rushed for 545 yards. Craig will have familiar faces in wide receiver Kyran Moore and Kentel Williams, who was third in receiving last year and led Austin Peay in rushing yards. While there’s not a ton to be excited about over the years, Austin Peay has to like the fact this team is intact for the most part, at least bringing experience to the table. Defensively, Gunnar Scholato returns after leading the Governors with 124 tackles, Jaison Williams had 3.5 sacks and Trent Taylor had eight pass deflections. The Austin Peay Governors haven’t won a road game since the 2010 season.

The Cincinnati Bearcats hope for a bounce back season after finishing 4-8 last year, and they gave former Ohio State defensive coach Luke Fickell his first head coaching job. The Bearcats have their quarterback in Hayden Moore, who showed bright spots last year and has a combined 20 touchdown passes the last two seasons. Cincinnati also returns its top two receivers in Devin Gray and Kahlil Lewis, a combination that produced 1,400 yards and 10 touchdowns. Mike Boone will takeover running back duties after 388 yards and two touchdowns last season. Defensively, Marquise Copeland will lead the way after 59 tackles last season, Cortez Broughton had 2.5 sacks and Alex Thomas had four interceptions. Cincinnati was 55th in the country last year, allowing 26.9 points per game. The Cincinnati Bearcats have won seven of their last 11 home games.

Usually I make a case for the underdog when we're getting monster numbers, but the Austin Peay Governors did nothing last season to suggest backing here. We're talking about a team that hasn't won a game in three years and lost by 40 points to Troy in last years season opener. The Cincinnati Bearcats are a decent team at both ends of the field and is usually solid at home. This game could be one of your typical week 1 blowouts that is over by halftime.