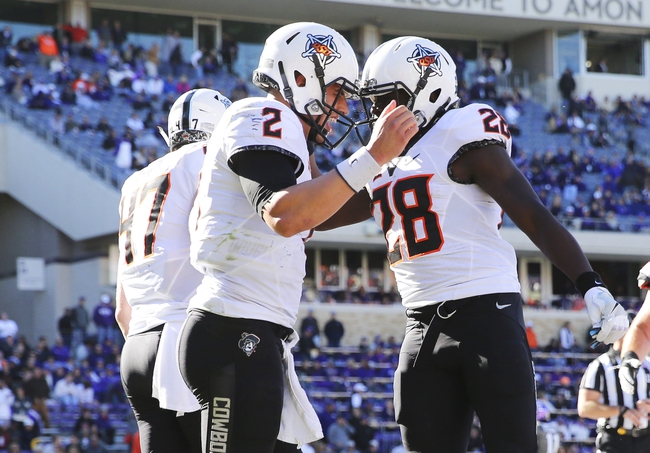 The Tulsa Golden Hurricane are coming off a 10-win season and hope to make a bowl game for a third straight year under coach Philip Montgomery. The problem is there are serious holes to fill for Tulsa with Dane Evans, James Flanders, Josh Atkinson and Keevan Lucas. That’s a ton of production to replace in one season. The good news for Tulsa is that D'Angelo Brewer, who topped 1,400 rushing yards and seven scores, is more than capable of leading the way until other players emerge. But don’t expect the Golden Hurricane to average 40-plus points like they did a season ago. Defensively, Craig Suits returns after 79 tackles last season, Petera Wilson Jr. had 6.5 sacks and Jesse Brubaker had two interceptions. Tulsa was 76th in the country last year, allowing 29.8 points per game. The Tulsa Golden Hurricane have split their last 10 road games.

The Oklahoma State Cowboys enter another season under coach Mike Gundy and have a chance to win double-digit games three straight years for the first time in school history. OK State will once again have one of the top offenses in the country due to arguably the best quarterback-wide receiver combination in the country in Mason Rudolph and James Washington. It also doesn’t hurt to have a running back in Justice Hill, who topped 1,100 yards and six touchdowns as a freshman. Oklahoma State averaged 38.6 points per game and can duplicate those numbers with their returning talent. Defensively, Chad Whitener returns after 71 tackles last season, Tralund Webber had six sacks and Ramon Richards had three interceptions. OK State was third in the Big 12 last season, allowing 26.5 points per game. The Oklahoma State Cowboys have won five straight home games.

The Tulsa Golden Hurricane are known for scoring a ton of points and they'll probably get to that point again eventually, but they lost far too many key players to expect to go toe-to-toe with a well oiled machine in their season opener. The Oklahoma State Cowboys are loaded and have the potential to win the Big 12 with their returning firepower. Tulsa is going to have a hard time keeping up in this game. Look for the Cowboys to make an early statement against the Golden Hurricane.