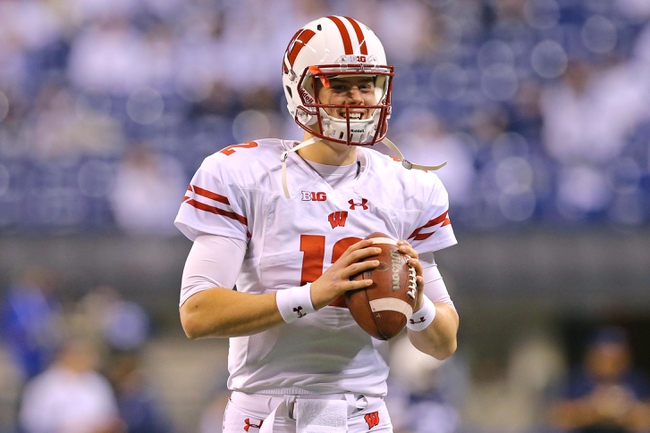 The Utah State Aggies look for a bounce back season after finishing 3-9 and losing their last five games. The Aggies have one of the more underrated quarterbacks in the country in Kent Myers, who had 10 touchdown passes last season and over 400 rushing yards. Myers will have help from running back Tonny Lindsey, who averaged over five yards per carry, while Ron'Quavion Tarver and Rayshad Lewis is a wide receiver duo that combined for five touchdowns last season. With all the returning talent, this should be the year we see Myers take that next step. Defensively, Dallin Leavitt returns to Utah State after 57 tackles, Jalen Davis had two sacks and Jontrell Rocquemore had two interceptions. Utah State was 73rd in the country last year, allowing 29.3 points per game. The Utah State Aggies have lost nine straight road games.

The Wisconsin Badgers have won double-digit games the last three seasons and seem to be building something special under coach Paul Chryst. While he had his struggles last season, another year should help quarterback Alex Hornibrook be more effective his sophomore season. Of course, leading wide receiver Jazz Peavy and one of the top tight ends in college football Troy Fumagalli, will also help the Badgers balance offensively. Bradrick Shaw is expected to takeover at running back after averaging five yards per carry and scoring five times on limited touches. Defensively, T.J. Edwards returns after leading the Badgers with 89 tackles, Garret Dooley had 3.5 sacks and D'Cota Dixon has four interceptions. Wisconsin was fourth in the country last year, allowing 15.6 points per game. The Wisconsin Badgers have won 10 of their last 13 home games.

Utah State is going to be better than it was last year and has an offense that can move the football. However, there's levels to this game, and Wisconsin is a deep team that plays hard and smart. Yes, the Badgers lost a few key players here and there, but this is a team that will continue to beatup on lesser comp, and that's the boat the Aggies fall in. Not to mention Utah State has been downright awful against the number the last two seasons. While four touchdowns is a lot to lay in a season opener, this is a game the Wisconsin Badgers should run away with in the second half thanks to its defense getting stops.