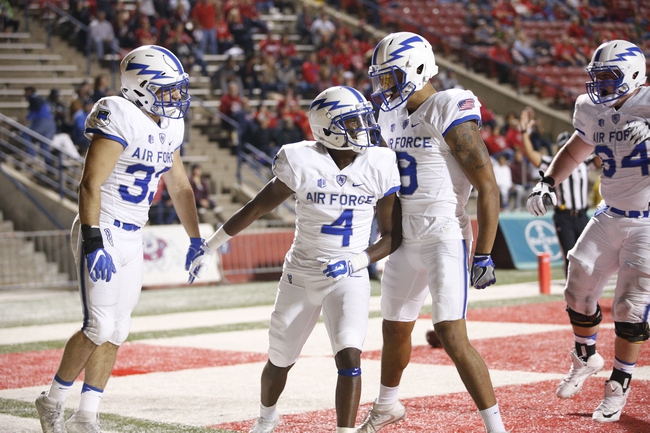 The VMI Keydets have nowhere to go but up after going 5-17 the last two seasons and hope a turnaround is coming in Scott Wachenheim’s third season. Austin Coulling will takeover at quarterback after throwing for 413 yards and two touchdowns in six games last season. A combination of Daz Palmer and Tyain Smith at running back produced seven touchdowns, and they’ll have to do a lot of the heavy lifting with so many receivers gone and Coulling trying to fit into his new role. Sophomore Rohan Martin will have to step up at receiver this season to replace so much lost production. Defensively, Allan Cratsenberg returns after 126 tackles last season, Ryan Francis had six sacks and Greg Sanders had two interceptions. The VMI Keydets have lost four straight road games.

The Air Force Falcons have won 28 games the last three seasons and hope to make a fourth straight bowl game. Air Force has two experienced quarterbacks in Nate Romine and Arion Worthman, while running back Timothy McVey returns after averaging 10 yards per carry and scoring 10 touchdowns. Romine and Worthman combined for 16 touchdown passes and more than 1,700 yards last season. In a triple-option offense, polished running backs and quarterbacks are key, and the Falcons have that in spades, so this should be a good year on the offensive side. Defensively, Grant Ross returns after 68 tackles last season, Santo Coppola had two sacks and Marquis Griffin had one pass deflection. Air Force was 49th in the country last year, allowing 5.4 yards per play. The Air Force Falcons have won 11 of their last 12 home games.

VMI may have lost a lot of games last season, but the Keydets didn't exactly get blown out in those losses, so the points here are worth a look. However, VMI did lose a lot of key players from a year ago and is running into an experienced Air Force squad that has high expectations with the way things have played out the past couple of years. The Falcons are tough at home and could make an early statement to the rest of their schedule with a blowout victory. VMI could get run out of the building in this contest.