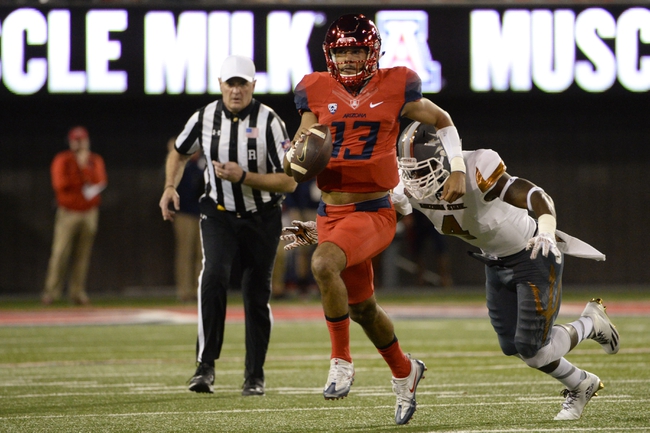 The Northern Arizona Lumberjacks will travel to Arizona Stadium to take on the Arizona Wildcats this Saturday night in College Football action.

The Arizona Wildcats had a disappointing 2016 season that saw the Wildcats finish with just a 3-9 overall record. Arizona lost their first 8 Pac-12 games in 2016 but was able to at least finish the season on a positive note after defeating in-state rival, Arizona State, 56-35. Offensively, Arizona averaged 24.8 ppg (ranked 100th) on 413.1 total yards per game. The Wildcats offense will be led by QB Brandon Dawkins who finished last season completed 53.6% of his passes for 8 TD and 6 INT while averaging 134.5 passing yds/game. Dawkins is a duel-threat QB who also got it done with his legs last season finishing with 10 rushing TD’s while averaging 94.4 rushing yds/game. In the backfield with Dawkins will be RB Zach Green (7.0 att/g, 33.9 yds/g, 3 TD) and Nick Wilson (11.0 att/g, 64.0 yds/g, 3 TD). Arizona lost 3 of their 4 top receivers from last year’s team but do return Shun Brown who had 3 TD’s last season while averaging 43.4 receiving yds/game. Defensively, Arizona allowed their opponents to average 30.5 ppg on 429.2 total yards per game. The Wildcats defense returns 7 starters however, Arizona will need big plays up front from defensive linemen Justin Belknap, Parker Zellers, and Sione Taufahema if they hope to compete in a loaded Pac-12 Conference.

Northern Arizona should be able to compete in the Big Sky Conference this season and although their defense is going to give-up points, the Lumberjacks have the offense talent to put up a lot points on the board. Rich Rodriguez needs a big bounce back season as he job is most likely in jeopardy after a few disappointing seasons, however, the Wildcats have one of the worst defenses in the Pac-12 and I just don’t think they have enough offense weapons to outscore the top teams in the country. The line has yet to be released for this one however, if there is an O/U, I’m going over as I think this is going to be a very high scoring affair. Please check back when the line is posted.