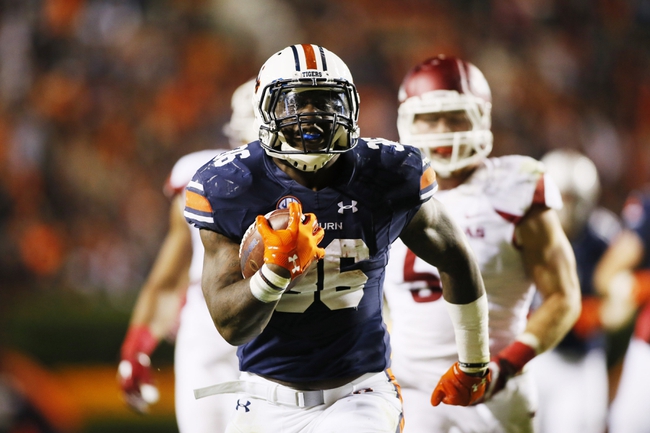 The Georgia Southern Eagles take on the Auburn Tigers in college football action on Saturday afternoon.

The Georgia Southern Eagles come into this season fresh off of a disappointing 2016 campaign that saw the Eagles start 3-0 but drop 7 of 9 to close things out, finishing 5-7, including 4-4 in Sun Belt conference play. The Eagles lose a few key pieces from last year’s squad, most notably being running back Matt Breida who is making an impact with the 49ers after posting back-to-back 1,400 yard seasons at Georgia Southern. Markus Eligwe will leave a sizeable hole in the defense after being drafted in the 5th round by the Kansas City Chiefs. The Eagles, who primarily run an option-based offense, will lose two key pivots from that scheme, as both Favian Upshaw and Kevin Ellison, who combined for 1,019 yards rushing and 9 touchdowns last season, graduated. Sophomore Seth Shuman will return to take over the offense, but will be missing not only Breida, but three of the Eagles’ top four receivers from last season with B.J. Johnson graduating and Montay Crockett was signed by the Packers as an undrafted free agent. The Eagles will also face plenty of challenges on the defensive side of the football, losing their top three linebackers including Eligwe and leading tackler Deshawntee Gallon, along with seven of their top nine defensive linemen from last year’s squad that allowed 400 yards of total offense and 26.5 points per game last season.

The Auburn Tigers will look to start 2017 strong after a frustrating 8-5 record in 2016 that saw the Tigers start the season 1-2 before rattling off 6 straight wins before falling apart down the stretch, culminating with a 35-19 loss to Oklahoma in the Sugar Bowl. Baylor transfer Jarrett Stidham is expected to lead the Tigers into the season as the starting quarterback, which was a widely criticized position for the Tigers last season. Kamryn Pettway and Kerryon Johnson are expected to lead the backfield with Pettway being more of the workhorse of the pair. The Tigers top three returning receivers hauled in a combined 764 yards, but with a quarterback like Stidham leading the charge,  wide receiver Kyle Davis could be in store for a breakout year, while the team’s most reliable wideout in Darius Slayton could see an increase in his workload as well.  Defensively, the Tigers have to replace Montravius Adams and Carl Lawson who made up 13.5 of the team’s 23.5 sacks last season. Auburn will hope that Marlon Davidson is worthy of the praise that has been showering him coming out of camp, while the linebacking core will be led by Paul James III and Tre’ Williams. The Auburn secondary also has a strong senior core coming into this season, and when put together, will be crucial towards Auburn’s success this season.

I have no doubt that Auburn is the better team and that they will be the better season this year. However you don’t want to give this many points to a Georgia Southern team that plays up to their competition. All three of Georgia Southern’s non-conference opponents from last season made it to a bowl game, and the Eagles lost to Western Michigan, Georgia Tech and Ole Miss by a combined 39 points. This is a capable bunch from Georgia Southern that can at least keep this score respectable. I think Auburn takes a couple series to figure things out and they get the job done, but not by five touchdowns. I’ll take the truckload of points with Georgia Southern.