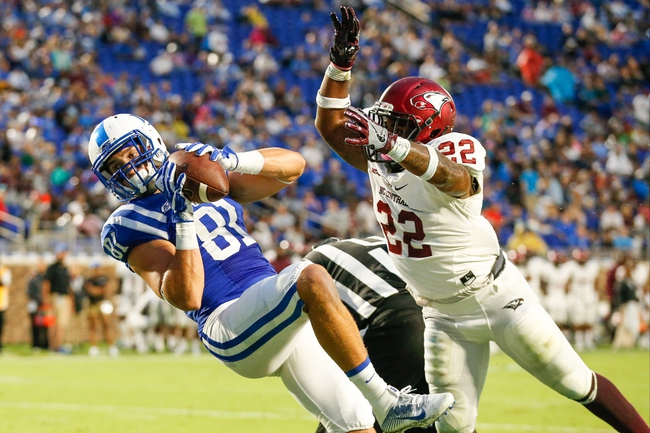 Out at Wallace Wade Stadium in Durham on Saturday, September 2, we’ve got a fun opening-week college football matchup looming between the North Carolina Central Eagles and the Duke Blue Devils.

North Carolina Central is coming off a successful campaign in 2016, going 9-3 overall and 8-0 in the MEAC. The Eagles’ season ended on a low note, however, as they lost in the Celebration Bowl to Grambling State 10-9.

Fourth-year head coach Jerry Mack is in charge of the Eagles once again, and he’s flanked by OC TC Taylor and DC Granville Eastman. QB Malcolm Bell is gone this season, opening up some opportunity for sophomore Nalil Ramadan, who bagged 243 pass yards and a pair of TDs last season. RB Ramone Simpson is back for the Eagles as well; he’s coming off 129 attempts for 667 yards and five scores last year.

Over on the Duke side, they finished at 4-8 overall and 1-7 in the ACC this past season. The Blue Devils beat North Carolina Central 49-6 in their 2016 opener, but only recorded wins over Notre Dame, Army and North Carolina during the rest of the year.

Head coach David Cutcliffe is back at Duke for his 10th year, and he’s joined by Zac Roper at OC and Jim Knowles at DC. They’ll have Daniel Jones back under center this season, coming off a 2016 with 16 touchdowns, nine picks and 2836 yards. Lead rusher Shaun Wilson returns as well; he put up 623 yards and four touchdowns for the Blue Devils last year. Duke also returns their top receiver in TJ Rahming, who managed 70 catches for 742 yards and one TD.

I’m not going to try and overthink this one too much. Considering the beatdown Duke gave NC Central in the opener last year, and the fact that the Blue Devils are returning several impact players from their 2016 campaign, I think Duke holds all the cards here. I expect lots of improvement from the Blue Devils in 2017, starting with this opener. I’ll take Duke to cover.