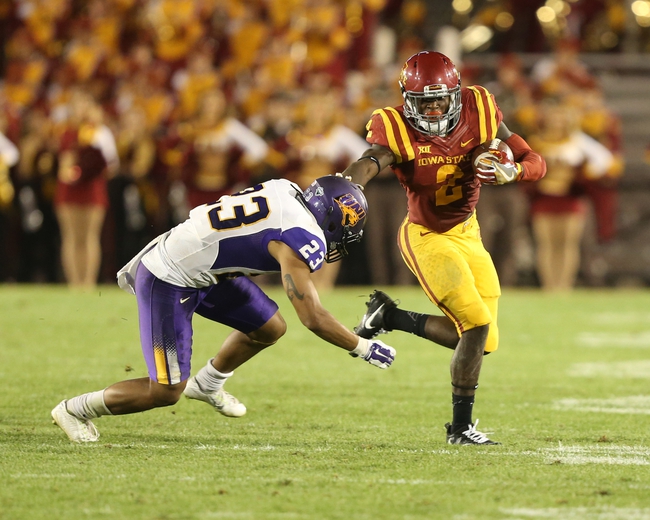 Out in Ames at Jack Trice Stadium on Saturday, September 2, we’ve got an intrastate college football rivalry matchup between the Northern Iowa Panthers and the Iowa State Cyclones as both teams get their seasons going.

For the 2017 season, head coach Mark Farley returns to the Panthers for his 17th season, and he’s flanked by OC Bill Salmon and DC Jeremiah Johnson. Eli Dunne is back at QB for the Panthers this season following his 1175 yards and seven TDs in five games last season. Junior RB Marcus Weymiller will be taking an expanded role in 2017 for Northern Iowa, and he managed 32 rushes for 246 yards last season. At WR, the top man is Daurice Fountain, who is coming off 33 catches for 413 yards and five scores during 2016 for the Panthers.

Over on the Iowa State side, they’re fresh off a season that saw them finish just 3-9 overall and 2-7 in Big 12 play. The Cyclones’ trio of wins came against San Jose State, Kansas and Texas Tech.

Matt Campbell is the Cyclones’ head coach once again this season, and he shares second-year status with OC Tom Manning and DC Jon Heacock. The good news for the Cyclones is that they’ve got 13 returning players on offense, 11 on defense and five on special teams. That group includes QB Jacob Park, who tallied 1791 yards and 12 touchdowns last season. The RB tandem of David Montgomery and Mike Warren return to Iowa State as well; Montgomery posted 563 yards and two scores last year, while Warren put up 559 with three TDs. Senior WR Allen Lazard had a nice 2016, bagging 69 catches for 1018 yards and seven touchdowns for the Cyclones.

Neither the Panthers nor the Cyclones were especially impressive last season, but there are a few positives on both sides to build on. Most notably, Iowa State is returning a healthy amount of impact players for 2017, and those starters should take another step forward in a familiar system during this year. I’m going to side with experience here and take Iowa State to cover.