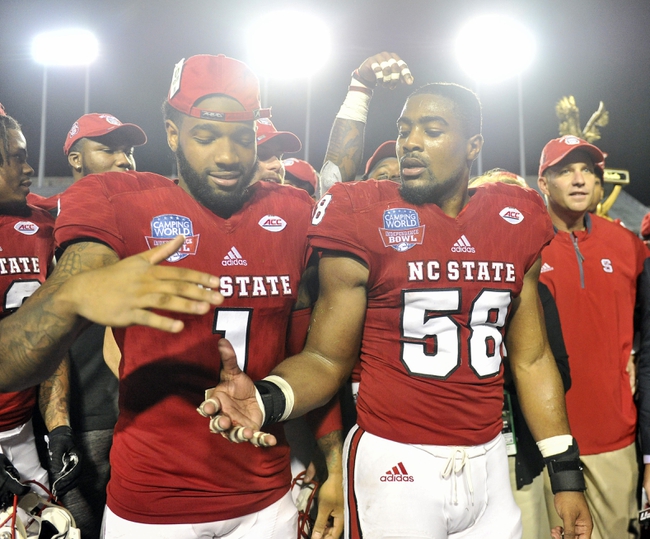 The NC State Wolfpack come into this one looking to break through after a mediocre 7-6 record in 2016, culminating with a 41-17 Independence Bowl victory over Vanderbilt. A lot of key pieces from last year’s team return for the 2017 season, including incumbent starting QB Ryan Finley. Finley completed 60.4 percent of his passes for over 3,000 yards with 18 touchdowns and 8 picks, so there could be an uptick if Finlay is able to handle the workload presented to him this season. The Wolfpack’s top three receivers will return this season, with Jaylen Samuels leading the charge after hauling in 55 balls for 565 yards and a team-high 7 touchdowns, bringing his career total to 31 scores in 39 career games. Stephen Louis will also be a weapon at Finlay’s disposal, while Nyheim Hines will transition from wideout to running back to replace last season’s 1,000-yard rusher in Matt Dayes. NC State also returns a solid offensive line and boasts one of the top D-lines in the country, including Bradley Chubb who logged 21.5 tackles for a loss and 10.5 sacks last season. The secondary is the major concern as three new starters need to be anointed, however if the Wolfpack can maintain their dominance against the run and strengthen their pass defense, NC State may be a sleeper out of the ACC this season.

The South Carolina Gamecocks will try to start the year on a high note after a disappointing 6-7 record in 2016 that saw the Gamecocks fall to South Florida in the Birmingham Bowl by a final score of 46-39 in overtime. 2017 is the first year in the post-Connor Shaw era that South Carolina has had a grasp of who will be starting under center going into the opener. Jake Bentley proved to be a capable pivot for the Gamecocks, throwing for over 1,400 yards and nine touchdowns in seven games for South Carolina last season. The Gamecocks also have a pair of electric receivers in Deebo Samuel and Bryan Edwards. Samuel led the team with 783 yards receiving and a touchdown with his 59 receptions last season, and if Edwards can continue to make big plays, he will attract more attention, leading to Samuel being one-on-one where he is extremely dangerous for South Carolina. The Gamecocks return a few key components from the defensive unit last season, including Bryson Allen-Williams who has a fire that burns no matter what the score is. What will be interesting to see is if senior Skai Moore can regain his form after suffering an injury in the offseason last summer and missing the entire 2016 season after leading the Gamecocks in tackles for his first three seasons. And if that happens, South Carolina could be a dark horse for the SEC championship game.

What I think this boils down to is NC State’s ability to defend the pass given the question marks in their secondary. I’m not sure NC State will have the matter sorted out before week one and that could lead to some big plays from South Carolina. This should be a great game between two potential dark horse teams in their respective conferences, but I see this one going down to the wire, so I’ll take South Carolina and the points.