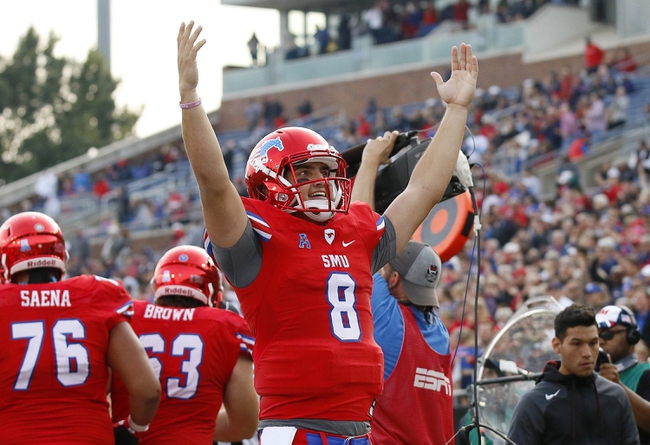 The Stephen F. Austin Lumberjacks would love for a big road victory to set the tone after a slow 5-6 season a year ago. Jake Blumrick is expected to takeover at quarterback and hopes to improve an offense that completed less than 50 percent of its passes. The Lumberjacks lost a truckload of production at the running back spot, but receivers Tamrick Pace and Trae Hart both showed playmaking ability last season and will help ease Blumrick into things before he’s ready to get the handcuffs taken off. There’s sure to be growing pains with this Stephen F. Austin Lumberjacks offense at least early in the season. Defensively, Brandon Hereford returns after 96 tackles last season, Simeyon Robinson had four sacks and Raven Greene had six interceptions. The Stephen F. Austin Lumberjacks have lost seven of their last 10 road games.

The SMU Mustangs have improved their win total in each of Chad Morris’ first two seasons and would become bowl eligible this year if that’s the case again. Ben Hicks is back at quarterback after throwing for nearly 3,000 yards and 19 touchdowns as a freshman, and he should improve drastically with another year under Morris. Hicks also has his top-two wide receivers back in Courtland Sutton and James Proche, a duo that combined for 16 touchdowns while 1,000-yard rusher Braeden West holds down the backfield. Needless to say, SMU could be deadly offensively this season. Defensively, Kyran Mitchell returns after 67 tackles last season, Justin Lawler had six sacks and Jordan Wyatt had four interceptions. SMU was 111th in the country last year, allowing 36.3 points per game. The SMU Mustangs have lost three straight home games.

It's dangerous to lay these type of numbers with teams that have shown to struggle defensively, but I'm not sure the Lumberjacks have the firepower to give the Mustangs a scare. With all of the returning talent SMU has and with a great offensive mind in Morris leading the way, this is a team that can light up the scoreboard often this season. We also Stephen F. Austin get blown out of the water last season when playing above-average offensive teams. This is one of those week 1 games that could get ugly quickly.