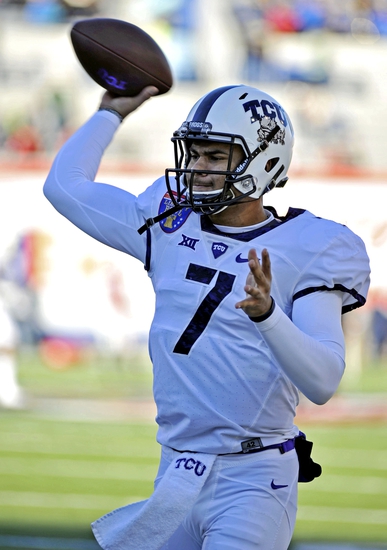 The Jackson State Tigers will travel to Amon G. Carter Stadium to take on the TCU Horned Frogs this Saturday night in College Football action.

The Jackson State Tigers had a tough 2016 season finishing with an overall record of 3-8 (3-6 SWAC-East). Offensively, Jackson State really struggled as the Tigers averaged just 18.5 ppg on 308.5 total yards per game. Jackson State suffered a big blow in the offseason as QB Jarin Morikawa (210.0 passing yds/g; 5 TD) decided to retire from football in the offseason due to concussion issues. QB’s Brent Lyles, Jordan Williams, Jarrad Hayes, and Travis Williams have been battling for the starting role which should be announced early this week. Leading the way for the Tigers backfield will be Jordan Johnson who had 2 TD and averaged 43.4 rushing yds/g last season. Jevon Floyd (25.5 rec yds/g) is the top returning receiver for the Tigers. Defensively, Jackson State held their opponents to an average of 28.8 ppg on 348.9 total yards per game. The Tigers defense is led by DL Keontre Anderson who is comes into the season as the SWAC’s Preseason Defensive Player of the Year.

The TCU Horned Frogs will look to bounce back from a disappointing 2016 in which the Horned Frogs finished the season with an 6-7 overall record which included a 31-23 loss to the Georgia Bulldogs in the Liberty Bowl. TCU ranked 29th last season in offense, averaging 31.0 ppg on 463.2 total yards per game. Offensively, TCU will be led by QB Kenny Hill who completed 61.1% of his passes from 17 TD and 13 INT while averaging 246.8 passing yds/g. Hill also showed the ability to get it done with is legs as Hill had 10 rushing TD’s while averaging 46.9 rushing yards per game. Leading the way for the Horned Frogs backfield will be RB Kyle Hicks who had 12 TD’s and averaged 80.2 rushing yards per game. TCU will have an experienced receiving core led by Taj Williams (3.0 rec/g, 54.0 yds/g, 5 TD) and John Diarse (2.5 rec/g; 34.0 yds/g, 3 TD). Defensively, TCU allowed their opponents to average 28.0 ppg on 424.8 total yards per game (185.8 rushing yds/g; 238.9 passing yds/g). TCU should have one of the better defensive units in the Big-12 this season and are led by the LB duo of Ty Summers and Travin Howard.

Jackson State struggled last season and it’s probably going to be another tough year for the Tigers as they are a young team and have a lot of question marks on the offensive end. TCU had a tough season last season, but have weapons on both sides of the ball to once again be a top-25 team in College Football. This game has yet to be lined and to be honest I won’t be surprised if this one doesn’t get lined at all as it’s going to be a huge number in favor of TCU. Please check back when/if the line is posted.