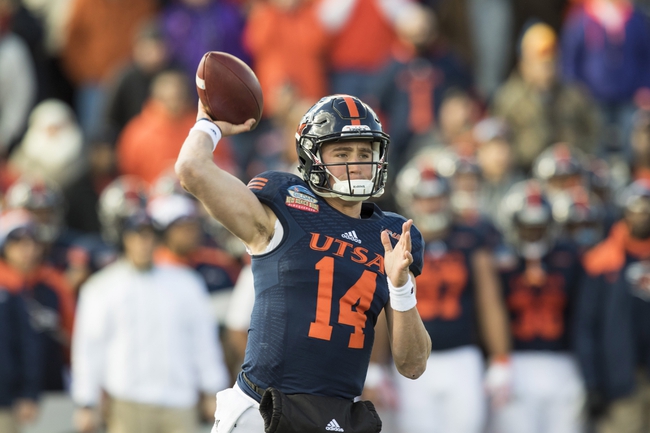 The Houston Cougars have won a combined 22 games the last two seasons, but they begin a new era with coach Major Applewhite taking over now that Tom Herman is coaching the Texas Longhorns. Houston should be fine offensively with Texas A&M transfer Kyle Allen taking over at quarterback, and he’s a better pure passer than Greg Ward was. Duke Catalon remains at running back and could easily top 1,000 yards if he’s healthy, while a wide receiver duo of Linell Bonner and Steven Dunbar combined for more than 150 receptions and eight touchdowns. Houston’s only question is the head coach change, as Herman knew how to push all of the right buttons. Defensively, Matthew Adams returns after 82 tackles last season, Ed Oliver had five sacks and Garrett Davis had five pass deflections. Houston was 30th in the country last year, allowing 23.5 points per game. The Houston Cougars have lost three straight road games.

The UT San Antonio Roadrunners look to take another step forward under coach Frank Wilson after six victories and a bowl appearance. UTSA has its quarterback in Dalton Sturm, who threw for 2,100 yards and 21 touchdowns, and he has a lot of help returning. Jalen Rhodes is more than capable of being a full time running back after averaging 5.3 yards per carry, and receivers Josh Stewart, Kerry Thomas Jr. and Brady Jones is a trio that combined for 16 touchdowns. The UTSA Roadrunners have enough talent and experience to be a squad that can drop 30 points on a regular basis this season. Defensively, Josiah Tauaefa returns after 115 tackles last season, Marcus Davenport had 6.5 sacks and Nate Gaines had seven pass deflections. UTSA was 63rd in the country last year, allowing 27.9 points per game. The UT San Antonio Roadrunners have lost eight of their last 12 home games.

The Houston Cougars will be fine in terms of talent, but the fact is they're starting the season on the road with a first-time head coach and a new quarterback. The UT San Antonio Roadrunners are a solid football team with an explosive offense and a defense capable of getting stops when it needs to. UTSA is being highly overlooked here, as this is a squad that has playmakers on both ends of the field. I'm taking the points here and wouldn't be shocked if UTSA sneaks an outright victory. Don't sleep on those Roadrunners.