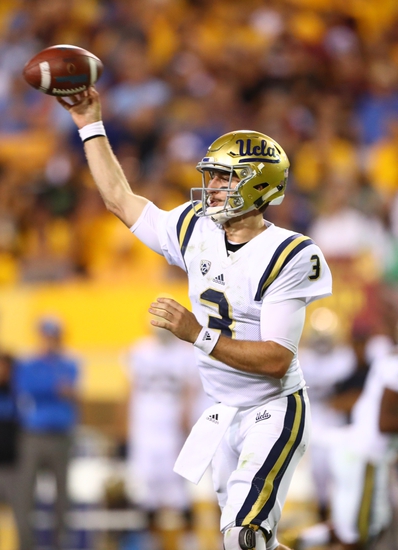 The Texas A&M Aggies will travel to the Rose Bowl to take on the UCLA Bruins this upcoming Sunday night in College Football action.

The Texas A&M Aggies started off strong last season, however, lost 5 of their last 7 games, including a 33-28 loss against Kansas State in the Texas Bowl, to finish the season 8-5 (4-4 SEC West). Texas A&M had a solid offensive last year as the Aggies averaged 34.8 ppg (ranked 34th) on 467.0 total yards per game (ranked 24th). Offensively, Texas A&M will be led by their backfield consisting of the RB duo of Trayveon Williams (12.0 att/g, 81.3 yds/g, 8 TD) and Keith Ford (9.7 att/g, 51.5 yds/g, 6 TD). The Aggies have yet to name a starting QB as Jake Hubenak, Nick Starkel, and Kellen Mond has continued to battle to earn the starting nod. The Aggies return star WR Christin Kirk (6.4 rec/g, 71.4 yds/g, 9 TD) and should have plenty of young talent at receiver position in Jhamon Ausbon, Hezekiah Jones, and Roshauud Paul. Defensively, Texas A&M held their opponents last season to an average of 24.5 ppg on 441.8 total yards per game (191.8 rushing yds/game; 250.0 passing yds/game). Texas A&M will hope that Qualen Cunningham and Jarrett Johnson can help replace the production that will be certainly lost with the graduation of Myles Garrett.

The UCLA Bruins had a season to forget in 2016 as UCLA lost 6 of their last 7 games and finished the year with an overall record of 4-8. The Bruins struggled offensively last season as UCLA averaged just 24.9 ppg (ranked 96th) on 379.8 total yards per game (295.6 passing yards/game; 84.3 rushing yards/game). Offensively, UCLA is led by their star QB, Josh Rosen, who completed 59.3% of his passes for 10 TD and 5 INT while averaging 319.2 passing yds/game in 6 total games last season. Rosen should have an experienced offensive line in front of him this season as the Bruins return all but one starter. Rosen’s main targets at the receiver positions will be Darren Andrews (4.6 rec/g, 59.1 yds/g, 4 TD), WR Jordan Lasley (3.7 rec/g, 56.4 yds/g, 5 TD) and Eldridge Massington (2.2 rec/g, 31.7 yds/g). UCLA hopes they can get more production from their running game this season which will be led by Soso Jamabo (7.45 att/g, 29.2 yds/g, 3 TD) and Bolu Olorunfunmi (6.5 att/g, 25.5 yds/g, 4 TD). Defensively, UCLA allowed their opponents to average 27.5 ppg on 382.0 total yards per game. The Bruins defense should be decent this season and will be led by LB Kenny Young and DB Jaleel Wadood.

Texas A&M was able to defeat UCLA at home last year in an exciting overtime victory, however, the Aggies have more question marks coming into this season and it must be a bit concerning that they’ve yet to settle on a starting QB. UCLA has one of the best QB’s in College Football, however, for the Bruins to be more successful on the offensive end, they’ll need to do a better job establishing the run this season behind a more experienced offensive line. Texas A&M always seems to start out hot to begin the season, however, I think both Josh Rosen and Head Coach Jim Mora have a lot to prove at UCLA this year, and I think the Bruins do enough at home in this one to cover. Take UCLA to cover.