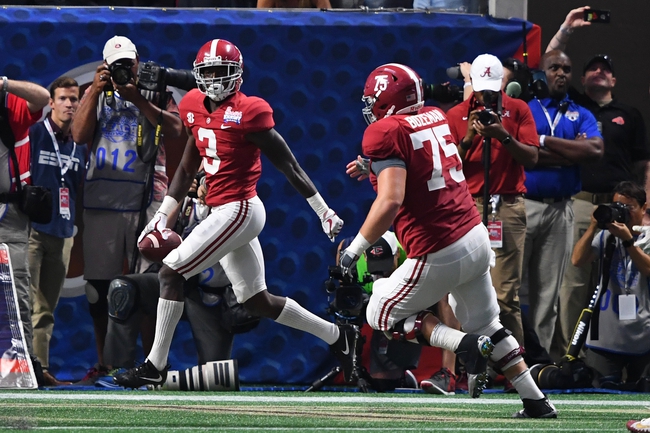 The Fresno State Bulldogs will look to pull off the upset when they take on the #1 ranked Alabama Crimson Tide in week 2 college football action.

The Fresno State Bulldogs will look to put up an early candidate for upset of the year, just one week after dismantling Incarnate Word by a final score of 66-0 in week 1. Chason Virgil went 16 of 29, throwing for a team-high 246 yards and a touchdown, while Marcus McMaryion threw for 103 yards and a pair of touchdowns. Running back Josh Hokit threw for a 65 yard touchdown on his lone pass attempt while also racking up a pair of scores on the ground with 4 carries for 13 yards as well. Ronnie Rivers used his 9 carries for a team-high 60 yards and a touchdown while Jordan Mims put up a rushing touchdown of his own. KeeSean Johnson led the Bulldogs with 7 catches for 120 yards while Jared Rice, Jamire Jordan, Justin Allen and Kyle Riddering each caught a pass in the end zone. Emeka Ndoh logged a pair of sacks, including a safety while Sherman Coleman added an interception as Fresno State held Incarnate Word to just 148 yards of total offense.

The #1 Alabama Crimson Tide proved to be every bit as good as their ranking, taking down the #3 Florida State Seminoles in their week 1 victory by a final score of 24-7. Jalen Hurts completed 10 of 18 pass attempts for 96 yards and a touchdown, while racking up 55 yards on 15 carries on the ground. Damien Harris led the Tide with 73 yards and a touchdown on 9 carries, while Bo Scarbrough used his 15 carries for 40 yards. Calvin Ridley far and away led Alabama’s receiving corps, catching 7 of the team’s 10 pass receptions for 82 yards and a touchdown, while also adding a two-point conversion reception as well. Defensively, the Tide’s trademark defense stood tall once again, combining for three sacks and two interceptions while stifling the Seminoles’ offense, holding FSU to just 250 yards of total offense in the win for ‘Bama.

Going from facing Incarnate Word to the top team in the country isn’t usually a recipe for success and I don’t think it will be either. The Bulldogs may have the best rushing defense in the country after week one, but rest assured that will only last one week, as Alabama should run all over the Bulldogs in this one after rushing for 173 yards against a top-25 rush defense from last season in Florida State. This is a monster line, but Alabama should be up for it and should get the job done here.