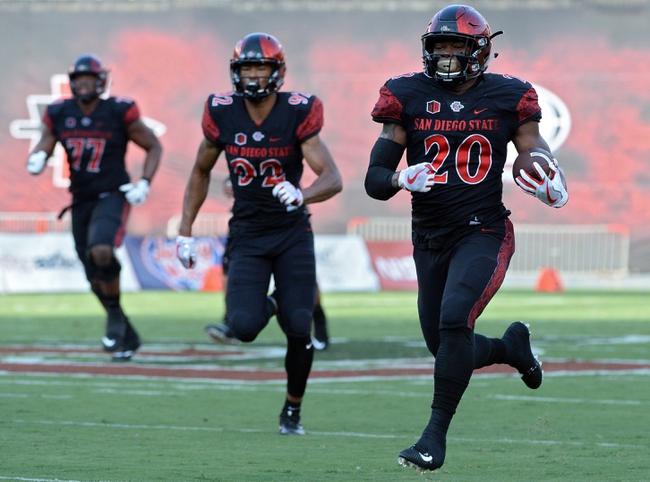 The San Diego State Aztecs will travel to Sun Devil Stadium to take on the Arizona State Sun Devils this Saturday night in College Football action.

The San Diego State Aztecs opened up their season last Saturday with a convincing 38-17 victory over the UC David Aggies. San Diego was outstanding defensively early in the game and had no trouble securing the victory after taking a 38-3 lead at the end of the 3rd quarter. San Diego State outgained UC Davis by a 513-315 margin and won the turnover battle by a 3-2 margin. Leading the way for the Aztecs was Rashaad Penny who had 197 rushing yards with 2 TD’s on 21 carries. Offensively, San Diego State had to replace start RB Donnel Pumphrey, however, Penny showed in limited action last year that he could put up big numbers and with a good offensive line in front of him, the Aztecs should once again be solid on the ground. QB Christian Chapman, who throw for 20 TD’s last season, returned for the Aztecs and looked good in the opener after completing 16 of 21 passes for 220 yards, 2 TD, and an INT. Sophomore TE, Kahale Warring, had a nice opening game of the season after catching 5 receptions for 74 yards and a TD. Defensively, San Diego State was outstanding  last season holding teams to just an average of 20.2 ppg and with LB Parker Baldwin and DT Sergio Phillips leading the way, the Aztecs defense should once again be tough to go against.

The Arizona State Sun Devils got more of a challenge then they expected from the New Mexico State Aggies, however, used a strong 2nd half to get a 37-31 victory over the Aggies last Thursday night. Arizona State jumped out to a quick 14-0 lead in the opening minutes of the game, however, struggled offensively for the remaining of the 1st half and allowed New Mexico State to fight back and make it a 14-13 game at halftime. Arizona State used a big 3rd quarter in which they scored 18 unanswered points to pull away for the victory. Arizona State was outgained by New Mexico State by a 549-400 margin however, the Sun Devils did win the turnover battle by a 2-0 margin. Leading the way for the Sun Devils was QB Manny Wilkins who completed 22 of 27 passes for 300 yards and 2 TD’s. RB Kalen Ballage had a decent game on the ground finishing with 79 rushing yards and 2 TD’s on 18 carries. John Humphrey (7 rec, 123 yards, TD) and N’Keal Harry (6 rec, 69 yds) were the main receiving targets for the Wilkins and the Sun Devils. Scoring has never been too much of an issue for the Sun Devils, however, if Arizona State plans to contend in the difficult Pac-12 conference, it must improve on the defensive end after the Sun Devils allowed opponents to average 39.8 ppg in 2016.

San Diego State doesn’t look like they’ve lost a step with Rashaad Penny taking over the lead RB duties for the Aztecs and as long as the Aztecs defense can continue to produce, San Diego State should be able to once again contend for a Mountain West Championship. Arizona State has some great weapons on offense, but must be concerned that they are in for another long season on the defensive end after they allowed the New Mexico State Aggies to gain 549 yards against them, including 398 yards through the air. Arizona State is always a tough place to play, however, as I’m not concerned about the Aztecs being able to score points, along with the fact that I think the San Diego State defense will be able to slow down the Sun Devils offense, I’m going to roll with San Diego State and the points in this one.