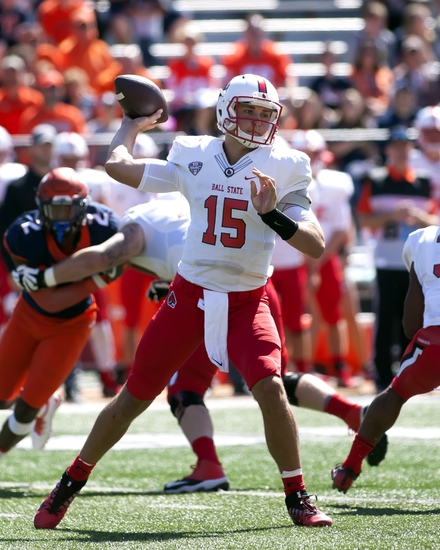 The UAB Blazers will be shooting for their second win to open 2017 when the team pays a visit to the Ball State Cardinals in week two. The Blazers played their first game since 2014 and were dominant in a 38-7 rout of FCS Alabama A&M. UAB led by just 10-7 at the intermission before the offense found a groove with a 28-0 second half burst. Alabama-Birmingham owned a 424-183 yardage advantage behind a strong defensive performance that produced a 27 yard pick six from Anthony Boyle while limiting the Bulldogs to seven first downs and a 1-15 conversion on third down. The Blazers did most of their damage on the ground  but the air was productive with AJ Erdely hitting 11-20 for 152 yards and a pair of touchdowns. Carlos Stephens and James Noble III combined for 150 rushing yards on 28 touches while Collin Lisa topped the Blazers with three receptions for 43 yards.

The Ball State Cardinals will be looking to bounce back from a opening week loss when the UAB Blazers come a calling Saturday. The Cardinals fell to Illinois 24-21 in week one when the Fighting Illini scored a touchdown with 2:06 remaining to erase a 21-16 deficit.  The numbers say BSU deserved a better fate as the team won the yardage battle 375-216 and held the ball for nearly 37 minutes. Riley Neal led an efficient, albeit short Ball State passing attack by completing 21-34 for 204 yards with a touchdown and interception with Riley Miller hauling in seven catches for 86 yards. James Gilbert paced the Cardinals rushing attack with 74 yards on 19 totes while Caleb Huntley totaled 42 yards on eight carries.  Ball State did allow a 52 yard punt return which helped offset a surprisingly strong performance from the defensive side of the football.

Ball State has to avoid a letdown because the team can’t afford an 0-2 start. I love what I saw from the Blazers in their opener but that was a super emotional win so I’ll lay the points and continue to look at this…