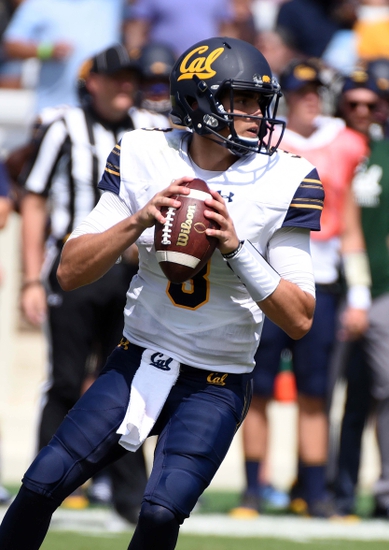 The Weber State Wildcats will travel to Memorial Stadium (Berkeley, CA) to take on the on the California Golden Bears this Saturday evening in College Football action.

The Weber State Wildcats opened their 2017 season with a record breaking performance in their 76-0 victory over the NAIA Montana Western Bulldogs this past Saturday. Weber State dominated on both sides of the football throughout the entire game and had no trouble pulling away for the victory after taking a 48-0 lead at halftime. The Wildcats outgained Montana Western by a 485-147 margin and held the Bulldogs to just 7 first downs. Weber state did the majority of their damage on the ground racking up 332 yards and 8 TD’s led by David Jones who had 87 yards and a TD on 15 carries. Weber State has had winning records over the past two seasons and although they lost QB Jadrian Clark, the Wildcats do return RB Treshawn Garrett (48.3 yds/g, 5 TD) and TE Andrew Vollert (70.0 yds/g, 7 TD) from an offense that averaged 26.0 ppg last season. Weber State struggled a bit defensively last season allowing their opponents to average 30.0 ppg however, with 8 returning starters, led by LB Landon Stice and CB Taron Johnson, the Wildcats hope these an improvement in 2017.

The California Golden Bears had a great start to their 2017 after an impressive 35-30 victory on the road against the North Carolina Tar Heels this past Saturday. In a tight back and forth game, California was able to put the Tar Heels away after taking a 35-24 lead on a Vic Enwere TD run with just 1:56 remaining. California outgained North Carolina by a 469-440 and won the turnover battle by a 3-2 margin. Leading the way for the Golden Bears was WR Vic Wharton III who had 5 receptions for 156 yards and a TD. California had one of the better offenses in the country last season as the Golden Bears ranked 22nd in scoring offense and 10th in total yards and have to impressed by the play of sophomore QB Ross Bowers who completed 24 of 38 passes for 363 yards, 4 TD, and 2 INT. California has one of the tougher schedules in the country this season and for the Golden Bears to have a chance for a Bowl game, California must improve a defense that ranked 127th in scoring defense and 125th in total defense. The Golden Bears might struggle again stopping the run with an inexperienced defensive line however, California should be better at the LB and defensive backfield, led by LB Devante Downs and CB Darius Allensworth.

Weber State had a great season opener, however, it’s hard to really judge how good the Wildcats will be this season after just one game against a NAIA opponent. California had an impressive win on the road against a decent North Carolina team and have to be encouraged by the play of their offense, in particular, QB Ross Bowers. This line has yet to be released, however, even with the expected big number that the Golden Bears will be favored by at home, I think the California offense will have no trouble putting up major points on the board against Weber State, so my initial thoughts is too take the Golden Bears in this one. Please check back when/if the line is posted.