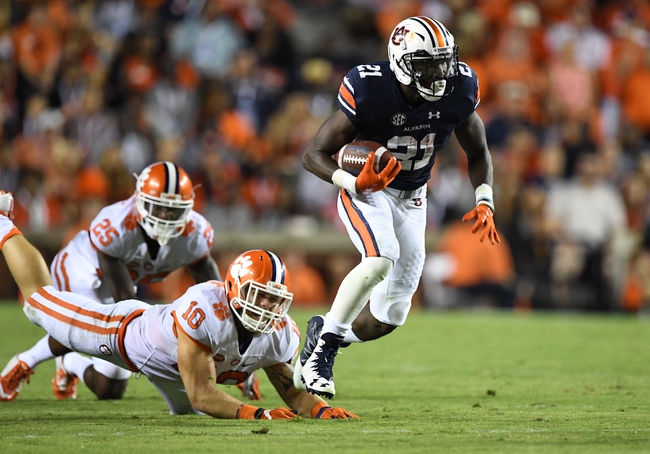 Out at Clemson Memorial Stadium in South Carolina on Saturday, September 9, the Auburn Tigers and the Clemson Tigers will be meeting up in college football Week 2 action.

Auburn is coming into this one at 1-0 after a dominating 41-7 victory over Georgia Southern in Week 1. In that game, QB Jarrett Stidham tossed for a pair of TDs and ran for another one, and the defense pretty much did the rest. Kam Martin and Kerryon Johnson were stellar as well, each bagging 136 rush yards and a TD.

Over on the Clemson side, they’re sitting at 1-0 as well after utterly destroying Kent State 56-3 in their opener. New Clemson QB Kelly Bryant was solid here, bagging 236 yards and a TD in the air and 77 yards on the ground. Travis Etienne led the Tigers in rushing with eight carries for 81 yards and a touchdown.

Clemson trying to return to glory this year after a 2016 that saw them finish 14-1 (7-1 in the ACC) and champions of the ACC, Fiesta Bowl winners and Consensus National Champs.

After each team came away from a cupcake matchup in Week 1, this game will offer a much more detailed and relevant view of each squad’s talents—and deficiencies. Right now, there’s not a whole lot to complain about when it comes to Clemson and Auburn’s inaugural performances, which outscored their opponents 97-10. Still, I think Clemson holds all the cards here, and they’re more than capable at putting together a cover if that offense shows up.