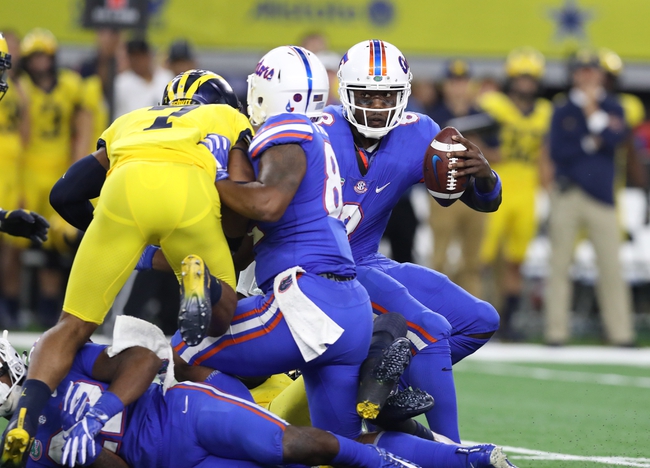 The Northern Colorado Bears will look to pull off the upset when they take on the #22 Florida Gators in Gainesville in week 2 college football action on Saturday night.

The Northern Colorado Bears will look to build on their season opening 41-14 win over the college of Idaho. Jacob Knipp led the Bears with 238 yards passing on 17 of 27 while calling his own number and punching in a rushing touchdown. Trae Riek turned his 18 carries into 71 yards and 3 NCU touchdowns and Anthony Davis added a rushing score of his own with 24 yards on 9 carries. Alex Wesley recorded 7 catches for 95 yards while Hakeem Deggs caught 4 passes for 65 yards. After the pair, no Northern Colorado receiver notched more than 2 receptions in the win. Defensively, a pair of interceptions from Luke Nelson and Isaiah Swopes highlighted the Bears’ performance as Northern Colorado allowed 336 yards of total offense in the win.

The #22 Florida Gators will look to bounce back after dropping their season opener to Michigan by a final score of 33-17. The Gators actually carried a 17-13 lead into the half before allowing 20 unanswered points the rest of the way. Malik Zaire led the offense with 106 yards passing on 9 of 17 through the air, while Feleipe Franks tossed for 75 yards on 5 of 9 passing. The Gators’ ground attack was non-existent, rushing for 11 yards on 27 carries, with 8 of those carries resulting in -29 rushing yards for the aforementioned Zaire. Josh Hammond led the team with 71 receiving yards on 3 catches, while Tyrie Cleveland hauled in a team-high 4 passes for 56 yards. The problem for Florida was holding onto the football, as the Gators fumbled the rock 5 times, turning 3 over to Michigan. It was a pretty good showing for Florida defensively, combining for 5 sacks and a pair of 2nd quarter pick-sixes, with Duke Dawson returning his pick 48 yards to the house while CJ Henderson added a 41-yard interception return for a TD.

Northern Colorado was nothing special in week one and the Bears could be in deep against a Florida team that isn’t happy with how poorly they performed in their opener. I’m leaning Florida here but I need to see a line before making my final pick, so please check back when a line is released for your free pick.