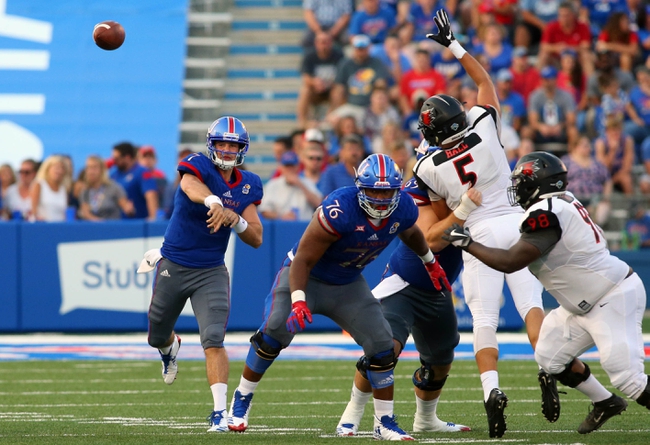 The Kansas Jayhawks also look for a 2-0 start after beating Southeast Missouri State in their season opener, 38-16. The Kansas Jayhawks have lost four of their last six home games. Peyton Bender is completing 62.2 percent of his passes for 364 yards, four touchdowns and two interceptions. Bender now has seven touchdown passes on 128 career pass attempts. Steven Sims Jr. and Ben Johnson have combined for 232 receiving yards and three touchdowns while Jeremiah Booker has five receptions. The Kansas Jayhawks ground game is averaging 73 yards per contest, and Dom Williams leads the way with 41 yards and one touchdown. Defensively, Kansas is allowing 16 points and 264 yards per game. Joe Dineen Jr. leads the Kansas Jayhawks with 15 tackles, Daniel Wise has one sack and Hasan Defense has two pass deflections.

Don't look now, but the Kansas Jayhawks have a chance to win two games in the first two weeks of the season, tying the win total the last two years combined. And you have to like their chances considering Central Michigan needed three overtimes at home to beat Rhode Island. The Jayhawks are experienced on both sides of the ball and are coming off a defensive performance in which they had seven tackles for loss and seven pass deflections. While it may not be big for other programs, this is a big game for Kansas to string back-to-back wins together and kind of feel like an FBS football team for once. I like their chances.