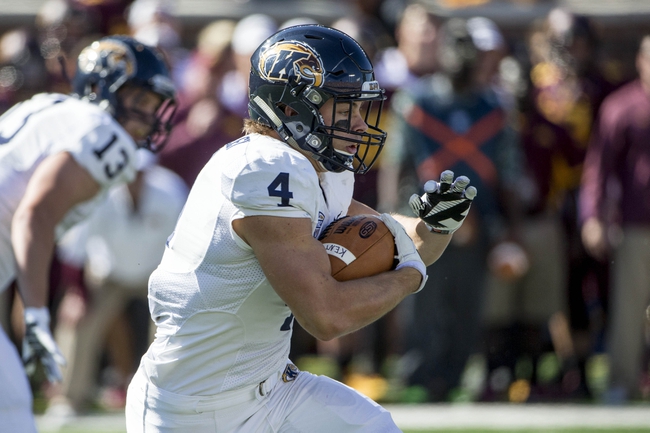 The Howard Bison look for the road upset of the Kent State Golden Flashes in a college football week two clash.

The Howard Bison have their eyes set on a second straight upset to kick the season off. The Bison pulled off a shocker of sorts with a 43-40 victory at the UNLV Rebels as an eye opening 45 point underdog. UNLV outgained Howard 564-449 but lost three fumbles which was crucial in such a close outcome. The Bison rode a short passing attack and a steady rushing game with quarterback Caylin Newton (Cam Newton’s brother) completing 15-26 for 140 yards with a touchdown and an interception. Newton was dramatically better using his legs with a game high 190 rushing yards on 21 carries with four and 52 yard touchdown runs. Howard received 71 yards and another two touchdowns on 20 totes from Anthony Philyaw who also paced the passing attack with three receptions for a team high 62 yards. The Bison did struggle defensively but also scored on a 75 yard fumble return by Devin Rollins.

The Kent State Golden Flashes will be looking for their first win of the year when the Howard Bison come to town. The Golden Flashes opened the season with a very tough assignment in the Clemson Tigers on the road and they were overwhelmed 56-3 as a 38 point underdog. Clemson took a 28-3 lead in to the intermission and Kent State could not respond over the final 30 minutes. The numbers tell the story with the Golden Flashes allowing 665 yards and 35 first downs while totaling just 120 yards and five first downs. Kent state didn’t throw the ball as the team tried to grind it out on the ground and milk the clock with quarterback Nick Holley attempting just four passes with one completion for a one yard gain. Holley was more effective on the ground with a team high 53 yards on ten carries  but punter Derek Adams might have been the Golden Flashes best player with a 46.5 yard average on eleven punts.

Howard is getting a ton of points and I honestly think this line will drop. I’ll take my chances with Philyaw and Newton who are a solid one, two punch that could pose a problem for the Golden Flashes…