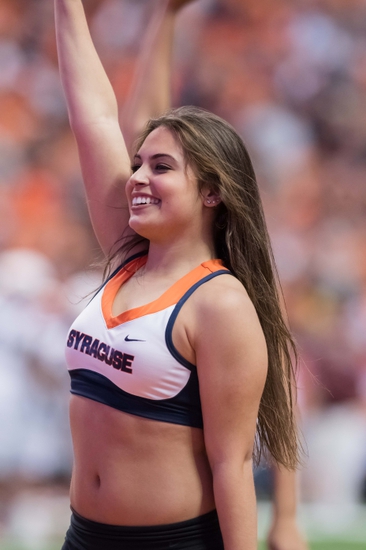 Out at the Carrier Dome on Saturday, September 9, we’ve got Week 2 college football action coming between the Middle Tennessee Blue Raiders and the Syracuse Orange.

Middle Tennessee comes into this game with an 0-1 record so far following a season-opening loss to Vanderbilt 28-6. In that game, Brent Stockstill tallied 166 yards, one TD and one pick, while Richie James had a nice outing on 10 receptions for 112 yards and a TD.

Last season, Middle Tennessee went 8-5 overall and 5-3 in Conference USA play. That record was good enough for a Hawaii Bowl invitation, where the Blue Raiders lost 35-52.

Over on the Syracuse side, they came into Week 1 with a dominant win over Central Connecticut State 50-7. The Orange racked up 586 yards in that one, including 155 in the running game. Eric Dungey managed to go 28-for-36 on the day with 328 yards and three touchdowns, and was also the Orange’s leading rusher with nine carries for 51 yards and two TDs. Steve Ishmael had a monster game for Syracuse with his 12 receptions and 134 yards.

In the 2016 campaign, Syracuse went 4-8 overall and 2-6 in the ACC. It was the first season for Dino Babers and his staff, who return this year.

Middle Tennessee is 7-2 ATS in their last nine games in September and 4-12-1 ATS in the last 17 games on fieldturf. The over is also 7-1 in the Blue Raiders’ last eight games overall.

Middle Tennessee started things off on a sour note in a game that should have been a lot closer than it was. Syracuse, meanwhile, beat up on an overmatched opponent, pretty much as everyone expected would happen. The Orange have some real talent on offense, and if they can dial in a running game that doesn’t rely completely on Dungey they’ll do very well. I like Syracuse to keep it going here and post a cover.