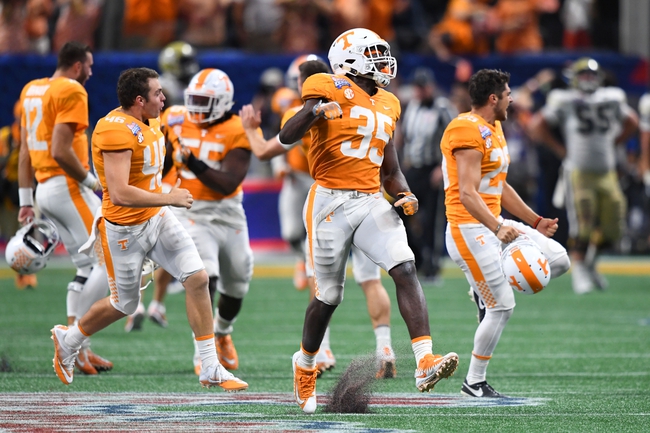 The Indiana State Sycamores will be looking to pull off the upset when they take on the #25 Tennessee Volunteers at Neyland Stadium in week 2 college football action.

The Indiana State Sycamores will look to make their first win of the season one to remember, after dropping their season opener by a final score of 22-20 at the hands of Eastern Illinois. Cade Sparks led the team with 95 yards on 3 of 9 passing, while Isaac Harker completed 4 of 10 passes for 38 yards and a touchdown that was cancelled out by an interception. LeMontae Booker led the charge for Indiana State, taking his 31 carries and spinning them into 154 yards and a rushing touchdown while also recording a receiving touchdown with his lone reception out of the backfield. Curtis Lee and Bob Pugh tied for the team lead with a pair of catches for 47 yards each, while Jacquet McClendon added a pair of receptions to round out the workload for the Sycamores’ receiving corps. It was a decent outing defensively for ISU, holding Eastern Illinois to 278 yards of total offense while forcing a fumble, Indiana State just couldn’t get the stops they needed when push came to shove, as seen by the game-winning Eastern Illinois touchdown with :03 seconds left in the game.

The Tennessee Volunteers cracked the top-25, getting the #25 slot after a solid 42-41 come-from-behind overtime win against Georgia Tech on Monday night. Quinten Dormady led the Vols under center, completing 20 of 37 pass attempts for 221 yards and a pair of touchdowns. John Kelly had to receive the game ball for Tennessee in the win, taking his 19 carries and turning them into 128 rushing yards and 4 touchdowns, while also adding a team-high 5 receptions for 35 yards.. Marquez Callaway led the team with 115 receiving yards while being on the end of both of Dormady’s passing TDs. The Vols were able to force 3 fumbles and recover 2 of them, but that didn’t stop Georgia Tech from putting up a blistering 655 yards of total offense, including 535 yards on the ground, just proving how lethal their option attack can be, even in defeat. However, the Vols still got the job done and will look to tighten things up here.

Tennessee was torn to shreds by Georgia Tech, and Indiana State runs the same kind of offense where it’s heavily predicated on the ground game, but the Yellow Jackets and the Sycamores are in two different tiers of the run game. I think the Vols can use this game to fix their problems in defending the run and have a good shot to turn this into a statement game, and I think they do so with a massive win and cover here