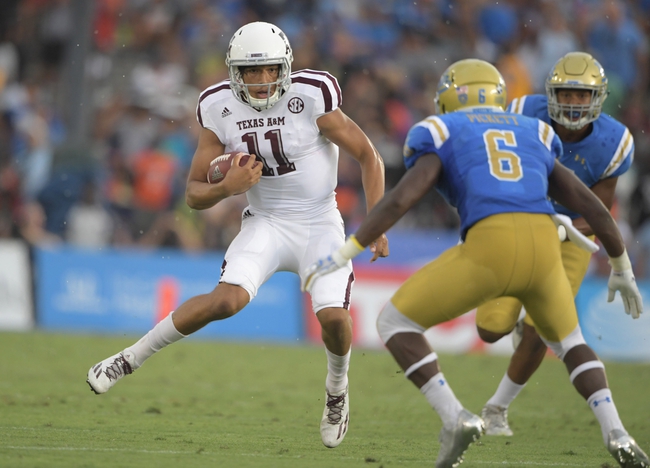 The Nicholls State Colonels will look to add to Texas A&M’s misery when they face off at Kyle Field at College Station in week 2 college football action on Saturday evening.

The Nicholls State Colonels will look to build on a solid 37-35 last-second win over McNeese State in their season opener. Chase Fourcade led the charge, going 10 of 21 passing for 213 yards, 3 touchdowns and an interception, while also leading the Colonels on the ground, rushing for a team-high 49 yards and a touchdown with his 10 carries. Damion Jeanpiere led Nicholls with 3 receptions for 145 yards and a pair of touchdowns, while Raheem Falkins added a score of his own for the Colonels in the win. The Colonels were dominated 2-to-1 in the time of possession battle, allowing McNeese State to control the ball for over 40 minutes, allowing McNeese to rack up 432 yards of total offense. On the plus side, the Colonels forced a pair of interceptions, including one that Jonavon Lewis took back 67-yards for the pick-six.

The Texas A&M Aggies will look to bounce back after suffering one of college football’s all-time greatest collapses, going from up 44-10 with 4 minutes to go in the 3rd quarter, to falling to UCLA by a final score of 45-44. Nick Starkel threw for 62 yards before leaving the game with a broken foot that could cause him to miss the remainder of the season. The Aggies ground game deserved the game-ball here, as Trayveon Williams led the team with 203 yards and a pair of TDs on 22 carries. Keith Ford added 114 yards and 3 rushing scores with his 18 carries while Kellen Mond racked up 54 yards on 15 carries while completing just 3 of 17 pass attempts for 27 yards in the loss. Christian Kirk led the Aggies’ receiving corps with 60 receiving yards on his 5 catches. Defensively, the Aggies combined for 3 forced fumbles and recoveries along with 3 sacks, but still fell short after allowing 554 yards of total offense. But the Aggies’ D suffered perhaps their biggest blow, losing defensive back Donovan Wilson to injury, possibly for the season.

Nicholls State had a solid win in week 1, but they’re in the line of fire here and are in danger of getting steamrolled. A&M has to be fuming after finding a way to blow a game that they thought they had in the bag. I’m sure the Aggies will use the Colonels as a punching bag here and will name their score, it's just a matter of getting accustomed to whoever is taking the snaps at QB come gametime. Either way, I think Texas A&M covers this game if they want to, and even with a somewhat injury-depleted lineup, I think the Aggies cover this ginormous line here.