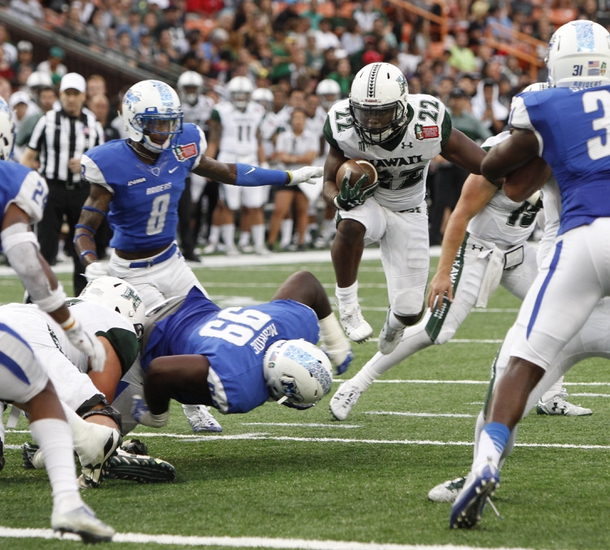 The Hawai’i Rainbow Warriors will travel to the Rose Bowl to take on the UCLA Bruins this Saturday night in College Football action.

The Hawai’i Rainbow Warriors improved to 2-0 on the season after defeating the Wester Carolina Catamounts, 41-18, this past Saturday. Hawai’i was in control throughout the entire game and put away the Catamounts after taking a 34-12 lead with 5:10 remaining in the 3rd quarter. Hawai’i was outgained by Western Carolina by a 482-453 margin however, did win the turnover battle by a 3-2 margin. Leading the way for Hawai’i was RB Diocemy Saint Juste who had 202 rushing yards and a TD on 25 carries. Hawai’i has been solid on the offensive end to start the 2017 season as the Rainbow Warriors are currently averaging 39.5 ppg on 478 total yards per game (272.5 passing yds/g; 205.5 rushing yds/g). Leading the way for the Hawai’i offense has been the backfield duo of Diocemy Saint Juste (24.0 att/g, 140.0 yds/g, TD) and Ryan Tuiasoa (10.0 att/g, 48.5 yds/g, 3 TD). QB Dru Brown has completed 61.0% of his passes for 5 TD and 3 INT while averaging 272.5 passing yds/g. John Ursua, who is questionable with an ankle injury, looks as if he will be the main WR target his season after reeling an incredible 272.0 yards on 12 receptions in their opening season win against the UMass Minutemen. Defensively, Hawai’i is currently allowing their opponents to average 26.5 ppg on 447.5 total yards per game (284.0 passing yds/g; 163.5 rushing yds/g).

The UCLA Bruins opened their 2017 in style after staging an improbable 2nd half comeback to defeat the Texas A&M Aggies, 45-44, on Sunday night. UCLA had no answers for the Texas A&M offense early in the game and looked like they were going to get completely run out of their own building after falling behind by a 44-10 margin with just 4:08 remaining in the 3rd quarter, however, against all odds, the Bruins scored on 5 straight possessions and took the lead for good after Jordan Lasley hauled in a 10 yard TD pass with just 43 seconds remaining. Leading the way for the Bruins was Josh Rosen who completed 35 of 59 passes for 491 yards and 4 TD’s. UCLA is led by QB Josh Rosen who is hoping to have a bounce back year after struggling last year with injuries. Rosen looks as if he will have plenty of weapons on the offensive end as not only does he have an experienced offensive line, WR’s Caleb Wilson (15 Rec, 208 yds), Darren Andrews (12 Rec, 142 yds, 2 TD), and Jordan Lasley (4 Rec, 100 yards, TD) all had great games in their season opener. The Bruins defense held opponents to just an average of 27.5 ppg game last season, and although they struggled early on against Texas A&M, have to be encouraged by their performance in the 2nd half in which they held the Aggies to just 6 points.

UCLA has some great talent on their team, led by Josh Rosen, however, this is a team that still has some major concerns as they look like they will struggle being able to run the ball. It’s important not to read too much into the Rainbow Warriors stats as they’ve haven’t played much in competition in their first two games, however, the Warriors do have a decent offense that can move the ball led by RB Diocemy Saint Juste. UCLA should be able to put some points up on the Rainbow Warriors defense, however, as I think Hawai’i and Diocemy Saint Juste will have some success against the Bruins rush defense that just gave up 382 rushing yards to the Aggies I’m going to take Hawai’i to cover with the points.