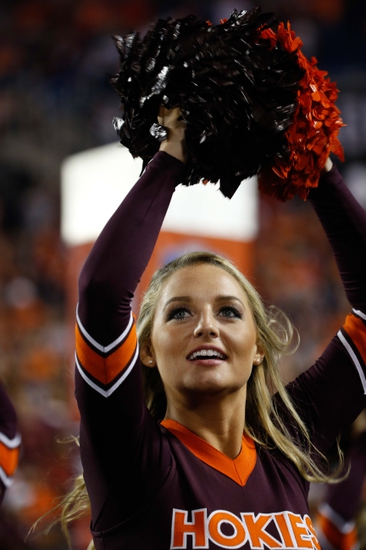 Out at Lane Stadium in Blacksburg on Saturday, September 9, the Delaware Fightin’ Blue Hens will be meeting up with the Virginia Tech Hokies in Week 2 college football action.

Delaware bagged a First State Cup victory in Week 1 against Delaware State, taking it by a 22-3 result. Joe Walker went 13-of-26 for 192 yards passing and found Diante Cherry for a 31-yard passing score. Cherry would also bag a TD on a 19-yard run and finish with 102 yards overall.

Delaware managed to go 4-7 in 2016, 2-6 in Colonial Athletic Association play. The slow start led to the ouster of fourth-year head coach Dave Brock, and Danny Rocco takes the reins this year.

Over on the Virginia Tech side, they’re coming off a wild 31-24 victory over West Virginia on Sunday evening. QB Josh Jackson passed for 235 yards, ran for 101 more and logged a pair of touchdowns in his opening start for the Hokies. Cam Phillips led the receivers with seven catches, 138 yards and a TD.

The Hokies went 10-4 in 2016 and 6-2 in ACC action. Virginia Tech took the title in the Coastal Division but lost the Conference Championship Game 42-35 against Clemson. The season ended on a high note in the Belk Bowl, however, with a 35-24 win over Arkansas.

The Hokies’ Black Diamond Trophy win was the first in a dozen years, and though Jackson had some sketchy moments in the game he was great in the running game. Virginia Tech’s defense came up big in the final series also, which bodes pretty well for their prospects moving forward. I like the Hokies to build off that opening-week win and bag a cover here, as long as the line doesn't inflate any more.