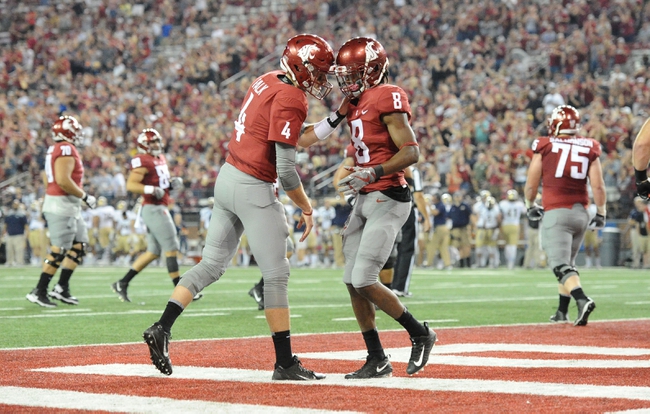 The Boise State Broncos will travel to Marin Stadium to take on the 24th ranked Washington State Cougars this Saturday night in College Football action.

The Boise State Broncos, behind their dominant defense, kicked off the 2017 with a solid 24-13 victory over the Troy Trojans this past Saturday. Boise State went into halftime with a 17-10 lead thanks to two big plays by Avery Williams (81-yd Punt Return TD) and Alexander Mattison (49 yard TD run) however, didn’t pull away from Troy until a Jake Roh TD reception put the Broncos up 24-13 with just 2:12 left in regulation. Boise State outgained Troy by a 357-215 margin and won the turnover battle by a 3-2 margin. Leading the way for the Broncos was Avery Williams who had a combined 172 yards and TD in 6 combined kick-off/punt returns. Offensively, Boise State brought back many weapons from last year’s team, led by QB Brett Rypien who completed 61.9% of his passes for 24 TD and 8 INT while averaging 280.5 passing yds/g. RB Alexander Mattison will led the Boise State backfield this season after RB Jeremy McNichols left for the NFL, and Mattison had a solid start to his season after rushing for 82 yards and a TD on 13 carries. WR Cedrick Wilson will be the main threat at the receiver position this season after finishing last season with 11 TD’s while averaging 86.8 receiving yds/g. Boise State’s defense returns some solid experience from a team that held its opponents to an average of 23.3 ppg last season and will be led by DT David Moa and safety Cameron Hartsfield.

The 24th ranked Washington State Cougars were outstanding on both sides of the ball and won their season opener after defeating the FCS Montana State Bobcats, 31-0, this past Saturday. Washington State had the game in complete control from the opening whistle and pulled away after taking a 21-0 lead with 7:09 left in the 3rd quarter. Washington State outgained Montana State by a 511-143 margin and held the Bobcats to just 28 total yards passing. Leading the way for the Cougars was QB Luke Falk who completed 33 of 39 passes for 3 TD’s and 311 passing yards. With the three TD’s, Falk became the Cougars all-time passing TD leader. Washington State is led by Luke Falk who completed 70.0% passes last season for 38 TD and 11 INT while averaging 343.7 passing yards per game. Falk lost some of his main receiving threats last season but looks like he is in good hands with RB James Williams who on top of rushing for 45 yards against Montana State, hauled in 13 catches for 163 yards and 2 TD’s. Also in the backfield for the Cougars will be Jamal Morrow who had 89 rushing yards and a TD on 10 carries. Washington State’s improved last season on the defensive end, holding opponents to just 26.4 ppg, and although it’s too early to think everything is fixed in a secondary that allowed 271.7 passing yards last season, the Cougars have to be encouraged by defensive performance in the season opener.

Boise State has some great playmakers on both sides of the ball, however, Troy gave them more of a battle than they expected in their recent matchup and without some big players by Avery Williams and Alexander Mattison, the Broncos might have opened up there season with a loss. Washington State has one of the best QB’s in the country in Luke Falk, and although he doesn’t have the same weapons as he did last season, he is good enough to make anyone on the offense look great. Washington State’s defense has been slowly improving over the last year or so and as long as their defense can limit the big plays from Boise State, I think Luke Falk and the Cougars offense do enough to cover this home spread. Take Washington State to cover.