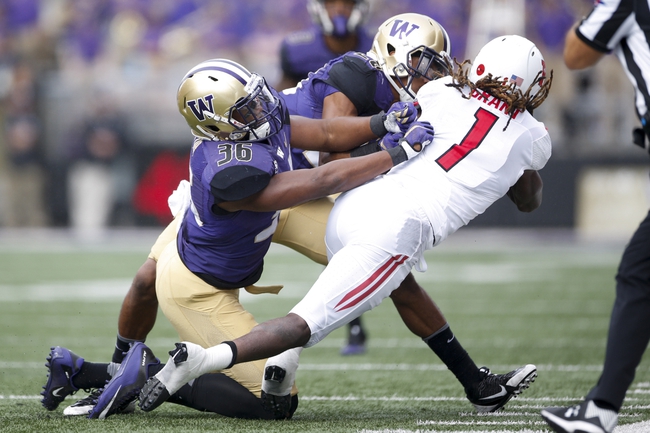 The Montana Grizzlies will travel to Husky Stadium to take on the 8th ranked Washington Huskies this Saturday night in College Football action.

The Montana Grizzlies had the offensive rolling in their season opener and kicked of their year with a solid 45-23 victory over the Valparaiso Crusaders this past Saturday. Montana led by just a 17-13 at halftime however, scored 21 points in a 4-minute span to take a 38-13 lead with just 12:17 remaining in the game. Montana outgained Valparaiso by a 538-450 margin and forced the Crusaders into committing 3 turnovers in the victory. Leading the way for the Grizzlies was QB Reese Phillips who completed 27 of 38 passes for 381 yards, 4 TD’s, and an INT. Phillips will have a great playmaker to throw to in Jerry Louis-McGee who averaged 9.1 rec/g for 81.4 yds/g last season and opened his 2017 season with 9 catches, 159 yards and 2 TD’s. In the backfield for the Grizzlies this season will be Jeremy Calhoun who had 9 TD’s last season while averaging 55.5 rushing yds/game. Montana has a lot of experience returning on the defensive end from a team that allowed their opponents to average 27.0 ppg last season and will be led this year by LB Josh Buss.

The 8th ranked Washington Huskies kicked off their 2017 season with a quality 30-14 road win over the Rutgers Scarlet Knights this past Saturday. Washington started off slow against the Rutgers defense however, a Dante Pettis punt return TD gave the Huskies a 10-7 halftime lead and Washington pulled away in the 2nd half after taking a 27-7 lead early in the 4th quarter. Washington outgained Rutgers by a 368-309 margin and won the turnover battle by a 2-0 margin. Leading the way for the Huskies was Jake Browning who completed 17 of 30 passes for 284 yards and 2 TD’s. Washington finished last season ranked in the top-10 in both scoring offense and defense and have the returning talent to make a run for a Notational Championship in 2017. Along with Browning at QB, the Huskies offense returns the backfield duo of Myles Gaskin (16.9 att/g, 98.1 yds/g, 10 TD) and Lavon Coleman (8.1 att/g, 60.9 yds/g, 7 TD) and have one of the best WR’s in the Pac-12 in David Pettis (3.8 rec/g, 58.7 yds/g, 15 TD). Defensively, Washington should once again be tough to score largely in part of their outstanding LB duo of Keishawn Bierria and Azeem Victor.

Montana had a down season last year, missing the FCS playoffs for the first time since 2012, however, look to get back on track behind an offense led by QB Reese Phillips and WR Jerry Louis-McGee. Washington has one of the best teams in the country this year and is certainly in the National Championship picture with outstanding playmakers on both side of the ball. Montana is generally always in the picture of the FCS playoffs, however, the Grizzlies just don’t have talent to matchup against an outstanding Huskies team that doesn’t have many areas of weakness. This game has yet to be lined, however, my initial thoughts is that the Huskies win this one in a blowout. Please check back when/if the line is posted.