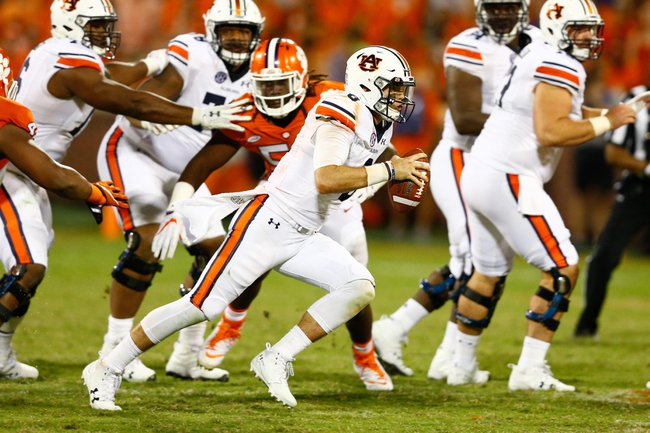 The Mercer Bears will look to pull off the massive upset when they travel to face the #15 Auburn Tigers in week 3 college football action.

The Mercer Bears will look to bounce back after suffering their first loss of the season, a 28-27 defeat at the hands of Wofford. Kaelan Riley completed half of his 28 pass attempt for 167 yards and a pair of touchdowns that were negated by 3 interceptions. However Riley did his best to make up for is by calling his own number 12 times and racking up 14 yards and a rushing touchdown. Tee Mitchell led the team with 58 yards on 11 carries in the loss. Only 3 Bears receivers logged a reception in the win, with Avery Ward leading the way with 7 catches for 113 yards and a touchdown. Marquise Irvin caught 5 balls for 21 yards and the other Mercer receiving TD while the aforementioned Mitchell caught a pair of passes out of the backfield for 33 yards. Defensively, the Bears forced a pair of fumbles but weren’t able to fall on either one, allowing a total of 367 yards of offense in the loss.

The #15 Auburn Tigers will look to rebound after suffering their first loss of the season, a 14-6 defeat at the hands of Clemson in week 2. Jarrett Stidham struggled to move the ball, completing 13 of 24 passes for 79 yards while taking 18 rushes and recording -42 yards rushing. Kamryn Pettway led the team with 74 yards on his 22 carries while Ryan Davis led Auburn’s receiving corps, recording almost two thirds of the team’s catches, hauling in 8 passes for 32 yards. The Tigers were held to just 117 yards of total offense in the loss, despite winning the time of possession battle. Defensively, the Tigers combined for 3 sacks while forcing and recovering a pair of fumbles. Carlton Davis far and away led the Tigers by recording 11 tackles in the loss.

Things could only look up from here for Auburn after last week, and a tune-up against Mercer may be what the Tigers need before starting their trek through the SEC. I have to think that the Tigers will be able to execute their offense against a Mercer defense that could only dream about being on Clemson's level, and I think this one is over by halftime, so I'll lay the points with Auburn.